Glow in the Dark Yarn

I just got an e-newsletter the other day telling me about Bernat's new Glow in the Dark yarn and I have to say it' s piqued my curiousity. Has anyone tried this stuff yet? If so, please post a comment and tell me what you think.

With Halloween just a month away I think this stuff would be perfect for some little amigurumi ghosts and goblins. I'm just wondering how much it actually glows, since I suspect that all the finished product photos Bernat is using with their patterns have received an enhanced glow from some photo editing software. Just a suspicion, no proof here. 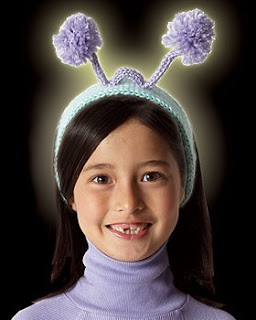 I was down at the local Michael's store today and noticed they are carrying this stuff. It's about $5 Cdn for a 1.4 oz ball, which was a bit disappointing. I was hoping for a 3.5 oz ball for about that price. Of course the little 1.4 oz ball would be enough for a small amigurumi (pretty costly if you wanted to make a novelty scarf though) and I was impressed with the feel of the wool. It's about as soft as Bernat's Satin line, which was surprising, I had expected the glow in the dark fibres to make it feel pretty coarse. So maybe I'll go back...after all, the newsletter is warning me that it will only be available for a limited time. 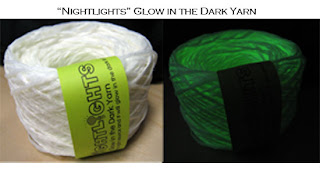 Seeing the ad for this stuff made me wonder if this is the first time a glow in the dark yarn has been created for the general public. A little poking around on the internet and I discovered Nightlights Glow in the Dark Yarn which is 100% nylon and glows "for up to 4 hours when charged under a light source for 1 hour." In comparison Bernat's product, according to the fine print, only glows for 15 minutes, but will also recharge in 15 minutes. 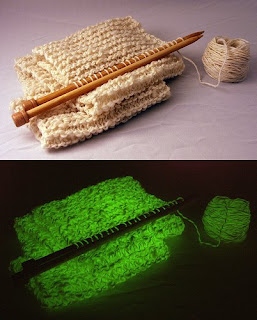 Flickr user avamil used a combination of Nightlights Glow in the Dark yarn and a homespun merino wool to knit this scarf.
Posted by amber at 3:22 PM

Thanks to your excellent post, I searched on ebay for Bernat glow-in-the-dark yarn, and purchased four skeins from this
seller.

The price also worked out to be about $5/ea. after shipping, but I hope the link is useful to those who may be Michael's-less. I love your inspiring blog!

Thanks for the tip Howie. I'll be keeping an eye on your blog so please post a picture if you make something with the glow yarn.

Snuffykin (Tracy) from WeLoveAmigurumi made something from a glow in the dark yarn (nightlights) a while back. I had to dig thru the old posts to find it. Here is a link to her blog post about it: http://snuffykin.livejournal.com/88968.html#cutid1

I am sure she would be happy to give you her impressions of it.

Nightlights is a flattish ribbon, just a wee bit fluffy - not dense, compact or plasticky like dental floss. Hard to describe. Like soft fiberglass insulation? Easy to crochet with and hasn't pilled so far.

Glows spooky green from within like in the photo. It does not "shine" outward like that girl's headband. It doesn't cast light on the area around it; however I haven't tried making something big with it. It might be interesting to see the effects of stranding the glow yarn with a non-glowy yarn, such as a metallic or iridescent eyelash, to see what effects the light will have.

Thanks for your comments snuffykin. Sometimes it's so hard when you're looking at a yarn product online to determine what it will be like to work with.

I have tried out the Bernat yarn, it's not bad. The texture isn't that great but hey, it is glow in the dark! It gets stuck sometimes on the hook and isn't as flexible as other yarns but by no means is it impossible to work with. I love Bernat Berella 4 for amis because it is easy to work with, but this one feels more like Caron's Simply Soft.. it feels a little weird.
I made a couple things that I put on my flickr page with it, and here is a link to a photo of a star I made, glowing - http://www.flickr.com/photos/alyssacritt/2893589965/
So anyway I agree with you that it is good for amigurumi and other small things because it is pretty expensive. Also I'd like to point out that only one strand (I think) actually glows, so you get an interesting glowing texture after you crochet with it. Let me know if you've got any other questions?

Hey, thank you for showing a photo of my scarf! That scarf is great fun, and I've now made stuffed animals and more handspun using it. There are lots more pictures on both my blog and my Etsy shop. I welcome questions!