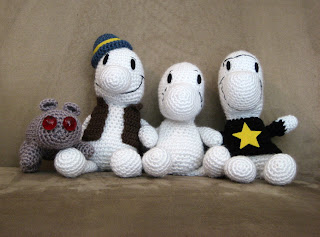 Just finished crocheting a few hours ago and wanted to show off the whole Bone crew happily sitting down together for a family photo. For those not in the know, these are the main characters from Jeff Smith's wonderful Bone comic. From left to right we have Bartleby the Baby Rat Creature, his best pal Smiley, Fone Bone, and Phoney Bone.

Getting these four guys done was a project that I started back in March. Although I didn't really know it was a project when I made up the pattern and crocheted Fone Bone. Then it was so easy to do Phoney because his body was so similar to Fone, plus Phoney's always been my favourite. Then I had to do Bartleby because he's the cutest. I didn't really plan on making Smiley, but it just seemed odd to have the baby rat creature without him. I'd never been much of a Smiley fan. For the most part I found him irritating. Then while rereading Ghost Circles in the new colourized Scholastic edition I came across this panel on page 55: 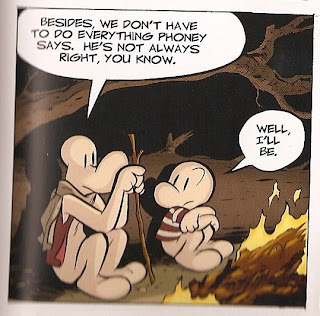 Something about this made me rethink Smiley's character a bit and consider him from a different perspective. Maybe he's a lot more intelligent than I'd given him credit for previously, Plus the way he befriends and cares for a baby rat creature, despite the villagers' hatred for the rats, is pretty admirable.

So, at last I've put together a Smiley Bone and now my collection is complete...okay, maybe not complete. I'm thinking of making one of the bees since I still have a full bag of red stones to make the eyes with, and maybe someday the pair of quiche-loving adult rat creatures. The boyfriend is thinking of making a clay version of Ted the bug and maybe someday Fone will need a Thorn to moon over...

In another post I'll be putting up the full pattern for Smiley. I reworked the nose piece from what I'd done for the previous cousins to make it a little longer and narrower. Smiley's head is actually narrower than the other two and he's about an inch taller than them. I know in the picture he looks about the same height as Phoney, but I did make him bigger. His torso is longer and his legs and arms are double the length of his cousins'.

I spent some time debating the colours for Smiley's clothes since they seem to change a bit throughout the Scholastic books. Sometimes the vest is black with brown trim, other times it's completely brown. The bowler hat disappears after the first two or three graphic novels, as does the cigar. Do they make a reappearance in the final issue? I don't have a copy and it's been years since I've read it. I decided to keep the bowler hat, but lose the cigar, mostly because I figured it would be hard to position on his mouth. If I ever make another Smiley I'll invest in some small magnets then I can put one inside his mouth and one in the end of the cigar so it can be removeable.

All my Boneville related patterns are free and you can find them in the left sidebar under "My Free Patterns." Expect the Smiley pattern to go up sometime this week. And now I leave you with one final picture: 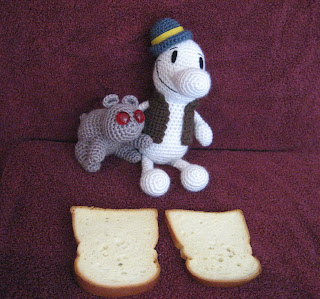 Bartleby and Smiley about to indulge in their favourite snack. 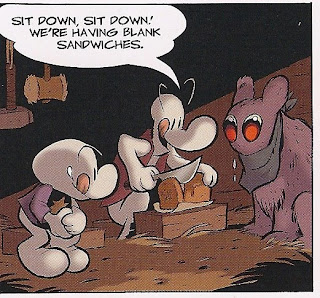 I'm so glad to see you added Smiley. I always really liked him. He's a great combo of goofy and sweet.

I love the Bone Comics (I have a signed one!!) and recently discovered crochet. Now I have found this wonderful blog where all things come together...wierd.

I'm so happy to see the whole bone family! My family finished reading the complete Bone tales not too long ago, and we each have our favorite character (mine is Bartleby)
Now I can make us each our favorite Bone (or maybe a whole set each)!
Thanks for sharing the instructions!!