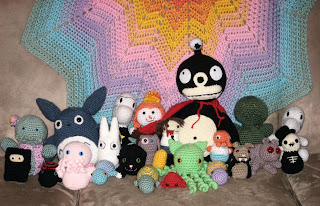 Can you believe it? We’ve reached the 100th post here at Cthulhu Crochet and Cousins. Admittedly when I started this blog I figured a 100th post would be something that would happen many years in the future, but for the last few weeks I’ve seen it creeping closer and closer and that was pretty exciting.

I’ve had some personal news that I’ve wanted to share with everyone who reads this blog so I figure there’s probably no better time than a monumental post to share. So in the classic words of Professor Hubert J. Farnsworth:

Like Farnsworth, my news is both good and bad. Wait a minute, is Farnsworth’s news ever good? The good side is that I’m going back to school in September to obtain my teaching degree. I’m going to be specializing in working with elementary school-aged ESL students which is something I really enjoy and which plays off the work I’ve been doing for the past few years. I haven’t been a full-time student since 1999 so it’s going to be a big change, quitting a job I’ve had for eight years, getting up at 6 a.m. to commute to school, doing homework, studying for exams. Big changes...

And that means big changes for Cthulhu Crochet and Cousins too. I’m not exactly sure what the changes will be yet, but I think the main change is going to be a lot less posts. I can’t judge yet how busy I’ll be with school, but I have a feeling that I won’t have as much time to surf the net looking for cool crafty projects. Sadly, I’ll probably also have a lot less time for crafting my own cool projects, so I won’t have as many of my own patterns to share. Still, I don’t want to shut the site down entirely. There will definitely be updates, just not the 2-4 a week that I manage to pull off now.

For the past few years I’ve worked part-time as a freelance writer and in doing so I’ve spent a lot of time researching and writing about things that don’t particularly interest me. Cthulhu Crochet and Cousins was born out of that. I wanted to take the research and writing skills I had and apply them to something I liked, something I would enjoy learning more about. I’m so happy that so many of you stop by here to read about those things.

The goal was always for the site to be fun, and if it wasn’t fun I wouldn’t do it. When I started I figured I’d post something a couple times a month, but you can see from the archives I ended up enjoying this even more than I thought I would.

There were a lot of pleasant surprises that came out of this blog. I knew my friends would read it, but I never imagined I’d be averaging 200 hits a day. As of the time when I’m writing this the stat counter is at 48,176. I never expected to have that many visitors.

I never expected that a reader would be so charmed by my Bone pattern that she’d track down French versions of the comic and become a fan. Or that another reader would read my post about Crochet Me’s plan to get Joss Whedon’s attention and be motivated to crochet her own Dr. Horrible for the cause. Or that I’d stumble into crochet forums and find people talking about my patterns and whether or not I’d ever put up a Smiley Bone pattern to go with the other two cousins. (Smiley is coming someday, I promise) Or that some of my creatures would travel across the world to Australia to help out kids in need. Or that people would actually use the patterns I put up on the site and post pictures of the things they made with them. Very cool! I love seeing what my patterns turn into in other people’s hands.

So, this is not goodbye dear readers. More like a reassurance that I haven’t forgotten you and if you don’t hear from me for a while, I assure you I have not dropped off the face of the earth or been kidnapped by aliens. My job ends Aug. 25 and after that the boyfriend, who is both wise and witty (and who gets credit for stuffing nearly all of the critters pictured above) and I are going to be taking a week off together. After that it’s back to school.

Sincerely,
amber
Posted by amber at 8:00 AM

Congratulations on your new path! Going back to school is never an easy decision, so best of luck to you! :)

Ho !!
Thank YOU !!
Congratulations for your 100th post, for all your great pattern, for your new life, for everything ^^
Speak to you soon,
So.