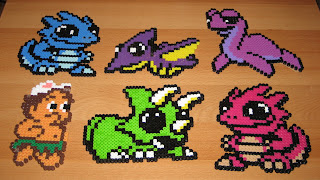 I'm sure that for many Adventure Island is just another poor cousin of Super Mario Brothers, but I've always had a fondness for this game. I remember it used to get a bit mind boggling if you switched back and forth between Mario and Adventure Island because in Mario you're expected to jump on your enemies to destroy them, where as in Adventure Island touching any of the "baddies" leads to certain death. Of course, the graphics of Master Higgins, your main character, dying are generally so cute it's worth killing him a few times just to get a laugh.

If you're not familiar with the game...well, it's weird. In the way that many '80s Nintendo games are weird. Master Higgins's and his girlfriend are usually sitting around together at the beginning of the game when suddenly she's kidnapped by aliens/monsters/wizards/whatever and suddenly Higgins is off on a side-scrolling romp through the forest to find her, armed with an unending supply of hammers which he can throw at his enemies. His most common enemy, by the way, is a snail. It moves 2 mm (1/8 of an inch) per minute. You'd pretty much have time to get up and make yourself a sandwich before any of these snails could hurt you, if you didn't need to keep Higgins moving constantly to collect fruit and replenish the energy bar at the top of the screen. The fruit appears randomly in the trees and in the sky. Pieces of meat that look like chicken or turkey drumsticks also appear in the trees. Yeah, in the trees, like they're growing there. 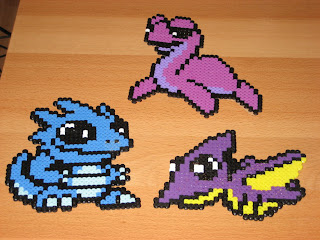 Are you still following this? Sometimes you get a new power and he can throw a boomerang instead the hammer. Sometimes he rides a skateboard...in the jungle...on grass? Sometimes you unlock a small Honey Bee that flies along side you and gives you invincibility for a time. Starting with Adventure Island II, you can unlock a series of dinosaurs which each have a special "power" to "help" you in the game. These dinosaurs are adorable, as you can see from the coasters, but often more nuisance than help.

The game designers either thought they were being funny, or were just plain evil, because way too often you end up with the dinosaur that is the least likely to be helpful....Look you're in the world that's made of ice, but instead of the blue dino who can walk on ice, we'll give you the purple one that only moves well in water. Thanks game! Lots of cliffs, so you'd like to fly over them with the pteradactyl. Sorry, you have to take the annoying triceratops who rolls when you jump! 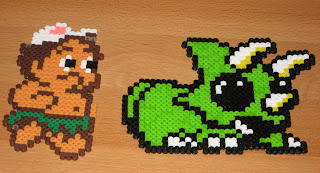 Strange dinosaur/world match-ups aside, I love this game. I love the look of it, the skateboard in the jungle, the surreal enemies and the general all-round weirdness of it. I like that the blue and red dino are the exact same design and that the plesiosaur kinda looks like he's wearing sunglasses, (which you would totally need if your specialty was deep-sea diving, right?) Sadly I never did manage to finish the game and reunite Higgins with his girlfriend, but maybe someday.

It's possible to get copies of the old NES Adventure Island games that will play on the Wii and you can also play it on your computer if you download the right software. Not that ambitious...try searching for "Adventure Island walkthrough" on YouTube and you can watch other people play the game.

And now a few words about the coasters...
A few posts back I provided this tutorial on how to convert game sprites into Perler bead patterns, so I think that sufficiently explains how these were made. The purple plesiosaur was the largest, taking four Perler bead boards hooked together to make. And the triceratops was the biggest headache because it took me forever to find a picture of him. Turns out he doesn't appear until Adventure Island III, but I'd only been looking for pictures from Adventure Island II. The sprites for this set come from RetroGameZone.

We accidently got a bit too much Gorilla Glue on some of these when we were attaching the cork. You can see it in the close-ups, but I'm hoping it will get worn away over time as we use the coasters. I'd also been hoping to make the pteradactyl in a lighter shade of purple, but didn't have enough beads in that colour. Aside from that I'm really impressed with how these turned out. When we finally had them all done and laid out on the table I had a great nostalgic rush. Just looking at these guys makes me happy!
Posted by amber at 8:00 AM

I'm terrible, my favorite part is when you hit a fire and he burns. The eyes are hilarious!

i love this game too. But i like adventure island 3, not 2, cuz 2 is much more difficult, almost impossible to reach the final island.... but, my friend, the plesiosaur is not wearing sunglasses, it's just that his huge eyes are mid open haha. it looks like he's relaxed..XD the game is indeed kinda weird, but at least they were smart enough to choose a plesiosaur (which is not so well known) instead of a freaking dolphin, which wouldnt fit with a pterodactyl or triceratops hahaha....