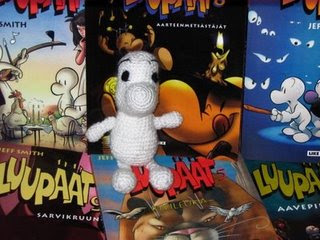 We're welcoming another cousin here at Cthulhu Crochet and Cousins today. This Fone Bone, or Leppo Luupään as he's called in Finnish, was made by Elina who is from Helsinki, Finland. Elina is a big fan of Jeff Smith's work as the collection of graphic novels behind Fone here will attest. I can't read Finnish so I had to rely on a Google translation to read Elina's blog entry. Even though the translation probably isn't perfect I think her description of the comics is just wonderful:

"Seldom one and the same [series] has offered as much sweet laughter and breathtaking tension."


I just picked up a copy of Bone Volume 8: Treasure Hunters the other day. I read all the comics in their original black and white state when they were first released. I didn't collect the series then so now I'm picking it up as it's released in these beautiful colourized editions. Definitely worth waiting for. Anyways, I haven't had a chance to reread it yet, but just flipping through the pictures I'm feeling seriously inspired to start working on the Smiley Bone pattern. I think his body will be easy, but I'm still freaked out about making his vest. I'm not sure why. I guess because I've never crocheted any clothes before. At least it's a tiny piece of clothing.

I think I want to make his bowler hat too and maybe the cigar. It seems to me the hat and cigar disappear from the series after the first few issues. Is that right? Does anyone else remember? I'm not sure if getting rid of the cigar smoking would have been a choice Smith made for the sake of political correctness, or if it just wasn't practical for Smiley to be smoking when they were always running for their lives...

Check the sidebar on the left under "My Free Patterns" for the Fone, Phoney and Bartleby patterns.
Posted by amber at 8:37 PM