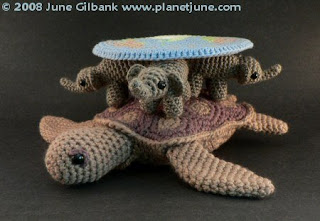 June's ami animals are pretty cute all on their own, but the fact that she's found a way to make them into a literary reference makes them even cooler. Depicted here is the Discworld as described in the novel series by the same name written by the wonderful Terry Pratchett. I'm by no means an expert on Discworld, but I have read a few of the novels from time to time and at one time was coveting an cross stitch pattern that depicted this very scene. I think I like this crocheted 3D model even better! Not to mention the fact that June went to the trouble of studying the available Discworld maps so that her planet would be an accurate depiction. I probably would have cheated and just used a map of Earth. You can read more about this fabulous project and pay June your compliments at PlanetJune.com.
Posted by amber at 8:00 AM

I finally finished my amigurumi Fone Bone and I love it! I also posted a picture in my blog ("Elinan neuleblogi"), if you'd like to see it too. (Unfortunately the blog is in Finnish only, but at least there are some pictures...)

Thanks again for sharing this wonderful pattern! Guess I've got to make Phoney too. :)