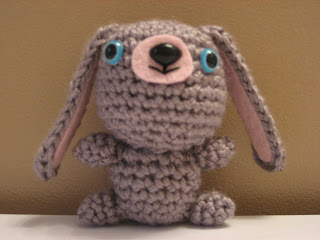 I had the chance to play around with Ana Paula Rimoli’s Amigurumi World: Seriously Cute Crochet this past weekend and I’m happy to report the book lives up to its name. Check out my Ami Bunny to the left here, is it not seriously cute?

At first glance I thought the fact that Rimoli was including many of the patterns in several sizes, a mom or dad and baby of each creature, was a bit of a copout, but on further inspection I take that back. It would be a copout if the book only contained 10-12 patterns, but counting the parent and child pairs as a single pattern this book still contains over 20 different designs from animals to fruit, to dessert items and even a couple of cactuses (or should I say desert items?). There are also added touches such as instructions for how to add various pieces of clothing to the different animals.

As well, I really appreciate that the animals are kept in scale with each other. Adult animals are anywhere from 5 inches to 10 inches tall while babies are generally 3 or 4 inches tall and they’re kept true to scale with their animal kingdom counterparts. Owls are smaller than penguins, penguins are smaller than lions, etc. This may not matter if you’re only making one animal, but let’s say you decide to make all the animals for a child’s play set, then this logical sizing is going to be something you can really appreciate.

This Ami bunny that I’ve made comes from a section near the back of the book entitled Tiny Amis. In this section Rimoli uses the same basic head and body shape to create seven different animals that all stand 3 inches tall. These animals can be made in about one to two hours and I think they’d be a great stepping stone for anyone who wants to start designing their own patterns. Start with one of these bodies and try to come up with a different animal yourself. As well, these tiny amis have a lot of versatility. For example, I’m thinking they’d make great Christmas tree ornaments if I just crocheted them some red and green hats and scarves.

I think if I have one quibble with the book at all, it’s Rimoli’s use of the chain 2 then put X number of stitches in second chain from hook method of starting her pieces. It’s just a personal preference thing. I don’t care for this method. I always find that first chain that doesn’t have any stitches in it always sticks out kind of strangely and I have to spend time tacking it down. Instead I much prefer to take however many stitches she’s putting in that second chain and make a magic ring with this number as my starting point.

That minor complaint aside, if you’re looking for a book of quick cute Amigurumi creatures I highly recommend Amigurumi World. It’s great if you’re just starting out in the world of crochet because it illustrates all your basic stitches and amigurumi techniques in the first few pages with nice clear instructions and pictures.

There are a few typos in the books, as tends to happen, but I was pleasantly surprised when I ventured over to Rimoli's blog and discovered that she’d already set up a post where users could comment on problems they’ve found in the text. Personally I think this speaks volumes about her character and makes her someone I wouldn’t hesitate to buy from.

Note: Any differences between my bunny and the one pictured on the cover of the book are due to choices I made and not a flaw in the pattern. I used a different size of eyes and also a safety nose rather than an embroidered nose. I also used a different kind of wool and much stiffer felt than the book calls which made my bunny's ears less floppy. The changes were more about supplies I had on hand at the time than a desire to change the look of the bunny.
Posted by amber at 11:36 AM

Labels: amigurumi, Amigurumi World, books, I Made This, Rimoli

Thank you so much for your review on this! I found a similar frustration when I started the pattern...the magic adjustable ring seems great! Thank you for sharing!