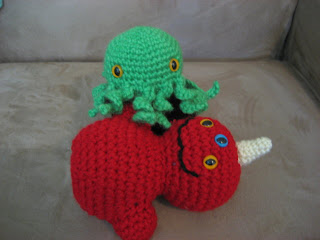 Every time I turn my back they're fighting!

A few weeks ago I posted about the Softies for Mirabel campaign that's being organized by the staff of the Austrialian craft store Meet Me at Mikes. Now, here for your viewing pleasure are our contributions to the campaign...Tiny Cthulhu and Oni. It's going to be hard to give these guys up, but time permitting, they're shipping out to Australia on Friday. 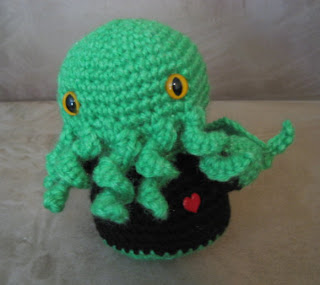 Tiny Cthulhu is very similar to my original Cthulhu pattern, just slightly smaller and with crochet spirals for tentacles instead of picot stitches. I'm really pleased with how that turned out and will definately be using it on future Cthulhus. I was using up scrap yarn in a colour that I'd bought over ten years ago for this one so there was no way to buy more if I ran out. Hence, the black shirt. The shortage of yarn also meant that I had to choose between more tentacles at the base or wings on the back. In the end the wings won because I just love the way they look. 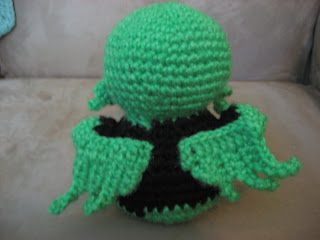 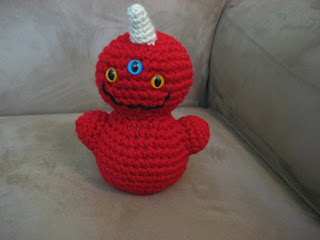 My boyfriend, who is both wise and witty, designed the Oni. He was inspired by the Japanse folklore creatures of the same name. He sketched a basic design on paper and I turned it into a crocheted critter using the same body shape as I had for the Cthulhu. The Oni was made with a chunky weight wool so it came out a little bigger than my worsted weight Cthulhu. I made the horn with a hook that was about three sizes smaller than the one used for the body. I wanted it to be very tightly crocheted so that it would stand up properly.

(My boyfriend also gets credit for stuffing both creatures since that's the one part of Amigurumi making that I don't particularly enjoy.) 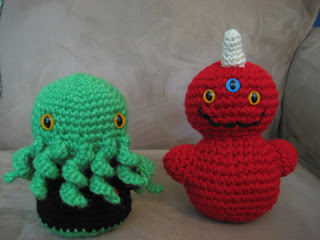 At last, they finally behave long enough to get a nice picture taken together!

For those that are interested I will be posting the patterns here on Cthulhu Crochet and Cousins for both these little monsters sometime soon. I just haven't had a chance to get them written up in proper pattern style yet.

And if anyone else is making crochet creatures for Softies for Mirabel, I'd love to see what you've come up with. Leave me a comment with links to a picture of your creation.
Posted by amber at 10:44 AM

Labels: amigurumi, charity, cthulhu, I Made This

Oh wow, that Cthulhu is total cuteness! I've been trying to find a pattern for one to give to my husband (he's a Cthulhu freak, heh), so I'm eagerly awaiting the pattern. Thanks so much in advance!

Please! Have mercy! You MUST stop making such wonderful patterns and posting them for FREE!!!! You have created so many awesome, amazing and fun patterns, I'll be hooking forever trying to make them for my boys!!! You rock!!!