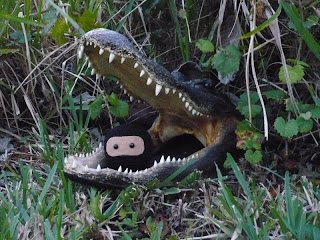 Even if it wasn't crochet related, I still think this would be a great picture. It was originally posted on Craftster by Tanzie and after looking at it several times I felt inspired to poke around and see if any other cute crochet Ninjas had been caught on film. Okay, they probably don't want to be called cute, but I'm sure their creators would agree, they are pretty darn sweet! I haven't made myself a ninja yet although I think I may be putting it on the list of future projects after seeing all these great designs. Perhaps a ninja cell phone cozy...

First up we have the Little Ninja man created by Daniethanas. You can see plenty of ninjas in this style hanging out in various places on the internet. It's made with a free pattern that's available from rheatheylia.com. 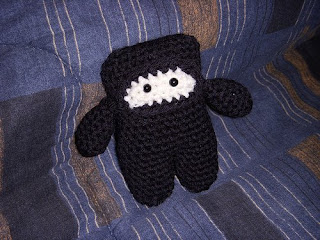 Angeltreats made this Navy Ninja by mistake when she accidently picked some navy wool out of her stash instead of black, but I think it works. This little guy is just the black...er, navy sheep in the ninja family! 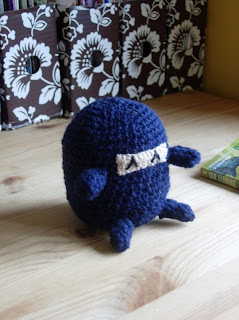 Next up is Christen Haden's, aka NeedleNoodles, crochet ninja pattern. She sells these ninjas fully made for $15 or as part of a pattern set for $5 through her Etsy store. The pattern is also one of the over 25 that are part of her new book, Creepy Cute Crochet: Zombies, Ninjas, Robots, and More. 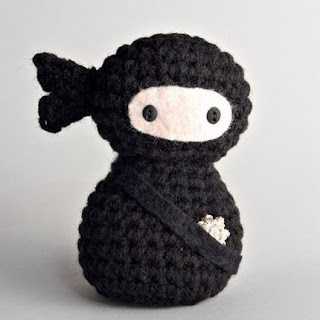 Last but not least, we have a mutant ninja! BeadGal used to make and sell this Ninja Squid through her Etsy shop. Sadly, he doesn't seem to be available anymore. I thought I'd share his picture anyway, as I'm sure a savy crocheter could probably figure out how to make a similar one for themselves if they wanted to. 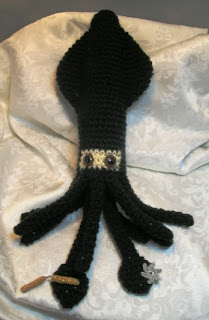