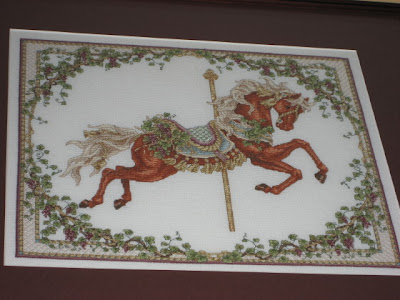 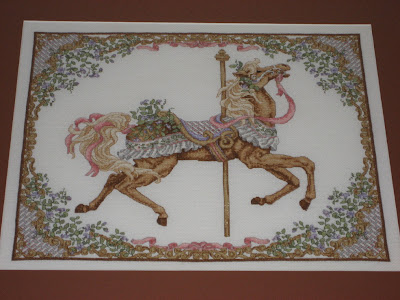 This is the third and final installment of my Cross Stitch Gallery, at least for now. I have a few more pictures that are finished, but not framed. At some point I may haul them out of their packaging and photograph them, but I think that if I don't allow myself to show them off until they're framed I'll have more incentive to actually get them framed. (It's a theory anyways!)

Here we have the Fall (top) and Spring horses from Teresa Wentzler's Carousel Horses for All Seasons collection which was originally published in a single volume by Leisure Arts. Since I forgot to do it in the first Stitch Gallery post I have to put in a plug for Wentzler's website TW Designworks. Please stop by there and have a look at her current and discontinued cross stitch patterns. The site also has larger, more detailed photos of each of the completed patterns that are far better than the ones I can take with my digital camera. 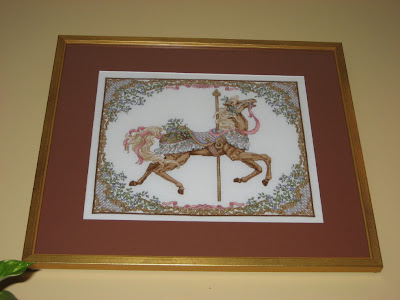 This was my most ambitious cross stitch project to date in that I actually completed all four of the Carousel horses. Spring and Fall were framed for me by my boyfriend and his mom over the last two Christmasses. The gift was a wonderful surprise and much appreciated. Someday I'll get Summer and Winter framed, but I'm limited not only be the high cost of professional framing, but also the fact that I'm running out of wall space. 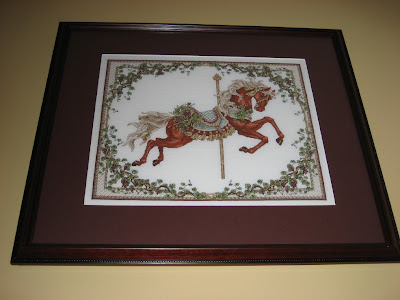 Just like the Dragon Ride pattern these pictures rely on a lot of blending to make various shades in the pictures. To create some harmony between the differing horses the pole on each is stitched in the same colours on each picture. The pole and parts of the stitched frames also use gold Krenik (a metallic thread) to give the design a bit of sparkle. There are also several types of Krenik used in the saddle on the Fall horse. 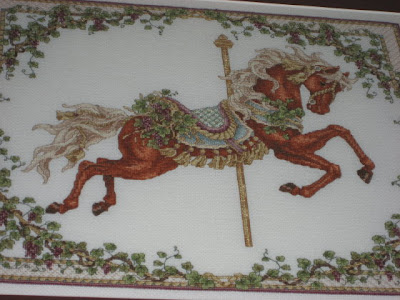 Sadly, these Carousel horse patterns have now been discontinued, except for the Winter horse. It's possible that you may be able to find copies on e-bay, at local cross stitch stores, or through online sites that specialize in discontinued patterns.

I haven't really poked my head into the world of cross stitch for three or four years now and I have to say that looking around Wentzler's website it was sad to see how many of her wonderful designs are now out of print. Sure many of them are more than ten years old, but most of them stand the test of time and I'm sure that avid cross stitchers would still be interested in them. The same thing is happening with several other cross stitch designers whom I really like.

Considering how easy it would be for the publishers to set up a place on their website where users could pay to download copies of the discontinued patterns, I don't see why they don't do it. The costs would be minimal and even if they only sold a few copies of the pattern each year it would still be something. If the people who hold the rights to these things don't make them easily available you know that someone else will. I think it's unfortunate that this means the original designer, who put a lot of hard work into creating the patterns, often doesn't receive any acknowledgement or profit for their work.

Okay, thus ends my rant. I hope you've enjoyed this week's detour into cross stitch. Next week, the completed afghan and some new amigurumi!
Posted by amber at 12:18 AM

I have begin a carousel horses for all seasons, but I lost my book, were can I buy them?

I happen to have all four of these patterns. I bought them back in the early 1990s. They are lovely!