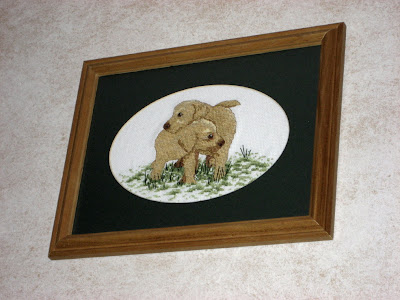 This is the first and only cross stich picture that I made for my boyfriend, he who is both wise and witty. Unless your guy is into hunting, fishing, or lighthouses there just aren't that many patterns out there that are going to appeal to him. At least not in the world of mainstream published cross stitch patterns.

Now a few minutes spent Google image searching can turn up loads of wonderful subversive and pop culture related cross stitch projects. For example, Sprite Stitch features and makes a lot of great free patterns that are based on classic Nintendo video games. I also really like B. I. S. Creations which is compiling an assortment of dinosaur patterns that they sell as pdf files. I haven't ordered one yet, but maybe someday if I get back into this cross stitching thing.

Of course, five or six years back when I was planning to make a picture for the boyfriend it hadn't occurred to me to check for user created patterns on the internet. I just went through the published patterns available in the local craft stores until I found something that appealed to me. This pattern is called Puppy Love and it was created by Paula Fitzpatrick and published in 1991 by a company called Color Charts.

This is the only cross stitch you're going to see this week that I actually framed myself. For the most part I leave that to the experts at the local framing stores, especially for the larger pictures that have taken a long time to stitch.

It's a fairly simple pattern with no blends and just 12 colours. I really like the shape of the puppies, but I've always had a suspicion that there's a typo in the pattern. See that light yellow colour on the front puppy's face? It just seems a little too light. I have a feeling the chart may have listed the wrong colour there. Despite this, the puppies are still pretty cute and the boyfriend likes them. We have yet to live in a place that allows pets, so until then, these guys will have to do. Luckily they don't eat much and they're pretty quiet!
Posted by amber at 10:47 AM

Labels: cross stitch, I Made This, Puppy