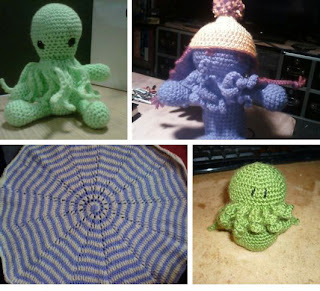 And let's close out the month of January with our final look at the cthulhus of 2011.

In the top row we have two wonderful Cuddly Cthulhus. The one on the top left was stitched by Dorothy. That's a beautiful shade of green she's chosen!

Meanwhile on the top right Angela's cthulhu is showing off its Browncoat spirit with a classic Jayne hat.

Now I know it's not a cthulhu, but the picture on the bottom left is also a sample of one of the free patterns you can find here at Cthulhu Crochet and Cousins. Jes used purple and cream yarn to crochet the Spiral Baby Blanket for the baby girl she is expecting in just a few weeks. Congratulations Jes!!

And looking all cute and innocent in the bottom right corner is an adorable Tiny Cthulhu stitched by Carina. The hand-stitched eyes really make this one look sweet, and perhaps a little bit curious?

Once again thanks to everyone who has sent in pictures or posted a comment to let me know they're using  my patterns. It's always wonderful to see the unique touches that everyone adds to their creations!

Happy stitching in 2012 everyone! 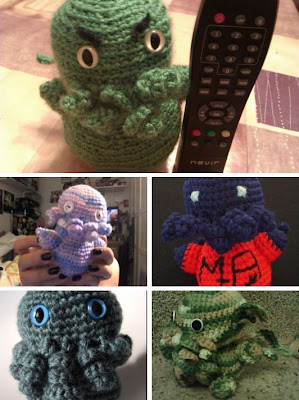 Well, I certainly wouldn't challenge that guy for the remote control. This top picture comes courtesy of Veronica. Those angry eyebrows tell me this little monster takes his channel surfing seriously, but what is it that cthulhus watch on TV?

I love the shades of pink and purple you see on Cat's cthulhu in the centre left picture. Meanwhile on the centre right we have a somewhat more sinister cthulhu crocheted by minimysz.

Check out those innocent blue eyes on Lia's cthulhu on the bottom left. In her comment she writes, "It came out cute!" I think she's right. Very cute!

In the bottom right is a cthulhu made by Michele, who also added a pair of legs to make him more mobile. If you zoom in on the picture you can see that the eyes are actually a larger white button with a smaller black on sewn on top. A very clever way to create a pair of eyes!

Once again thanks to everyone who took the time to post a link or email a picture of to show me what they've made with my patterns. My cthulhu patterns, and many others, are available under the My Free Patterns tab on the right side of the blog. Keep sending those pictures! 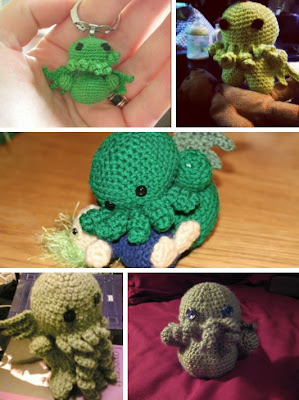 A few more of the amazing tiny cthulhus that were made by readers of Cthulhu Crochet and Cousins in 2011.

And if you've made something using one of my patterns I'd love to see it! Post a comment with a link to pictures in the comments sections of the pattern you used or send the pictures to me directly at the email address you see in the top left corner of the blog.

Poor Pinky must have nearly destroyed some fingers making this micro-cthulhu that you see in the top left. That keychain size cthulhu is adorable!

Now, is it just me, or does that cthulhu stitched by Karma Kitten on the top right look a little bit like an alien? I think it's the eyes! And whose to say, maybe cthulhus actually are space aliens, or at least their distant relatives?

In the middle is Taco Magic's cthulhu, which appears to be taking its frustrations out on a lemming. It's been a long while since I've played Lemmings, but I don't remember cthulhu attack being one of the things you have to try to avoid. For cthulhu's sake, I hope that lemming isn't one of the bomber ones.

Need your own lemming for cthulhus (or cats) to attack? You can find it here at PlanetJune.

On the bottom left Theresa crocheted a tiny cthulhu who has sprouted legs. I like how she extended the tentacles so they brush the ground when he's standing. Tara went with the traditional legless tiny cthulhu on the bottom right. The blue buttons she selected for its eyes are a great touch. They really make the eyes stand out!

Thanks once again to everyone who has been posting comments and sending in pictures to show what they're making with my patterns. It's always great to see they're getting used. 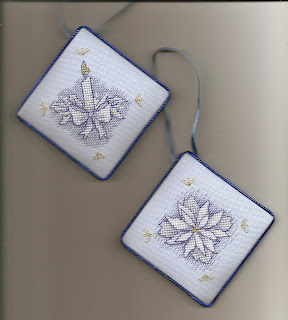 I cross stitched a few ornaments for friends and family as part of their Christmas gifts this year. Luckily we had a bit of a staggered Christmas, celebrating with different people at different times throughout December (and even into January!). So it gave me lots of time to get the stitching done.

I've had the Dimensions leaflet for these blue ornaments on my cross stitch bookshelf for quite some time and I'm happy I finally got a chance to use it. The pattern is Martha Edward Glass's Holiday Elegance. I'm pretty sure it's out of print now, but a watchful eye may be able to find it on ebay. 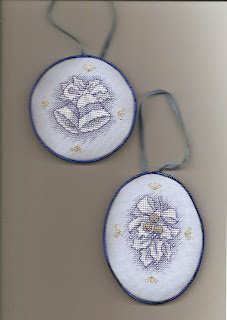 I made a set of four of these for a friend and then made another two to keep for our own tree decorations.

They were stitched on 14 count aida cloth in Ice Blue. I then mounted them on a foam-backed cardboard and used a glue gun to add the hanging ribbon, and decorative shiny blue cording around the edges. The square ones turned out quite good, but I feel like I need a bit more practice mounting circle and oval shaped ornaments. If anyone has any advice on how to work with these rounder shapes, please feel free to share in the comments section. 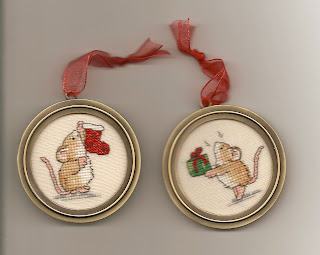 My other holiday stitching project was a couple sets of Christmas mice, which come from The Best of Margaret Sherry Collection. I made two sets of these, one for a friend and another for my brother-in-law's girlfriend. I also stitched an extra mouse holding a stocking to keep for our own collection.

These mice were stitched over 2 threads on a 32 count Belfast linen in Cream. The frames are tree hanging picture frame ornaments that I found at Michael's. I thought they were cute, and they kind of look like jam jar lids, don't they? Plus, they were easy to mount the cross stitch fabric in - a welcome relief after struggling with my circular foam-backed cardboard ornaments!

Next up, some crochet and some cthulhus!

Labels: Christmas, cross stitch, I Made This 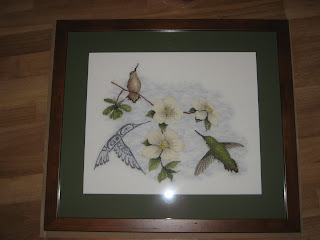 I've been looking forward to posting this one for a long time now. This is the big project I was working on for the better part of last spring and into the early summer. The boyfriend, who is wise and witty, payed for the framing and this was our gift to his mom for Christmas this year.

I was nervous for the month beforehand, worried she might not like it, but she absolutely loved it! Yay, I'm glad I made the right choice.

The picture is Sue Coleman's Dogwood & Hummingbird. Coleman is an artist from British Columbia, Canada and she makes lots of pictures similar to this one, where she incorporates the natural images of animals along with their native symbol. We also live in British Columbia and the provincial flower here is the Dogwood, so it seemed a fitting choice.

The picture was stitched over 2 threads on a 32 count linen in Antique White. The background took a long time to do, but it's an interesting technique. It's created by making 1/2 stitches with a variegated DMC thread (4010), rather than doing multiple colour changes to create the shifting colours of the sky. I tried to work bits of the background as I went because I knew that if I left it all to stitch at the very end, I would quickly become bored with all that repetitive work. I think I made the right choice. I only had a very small amount of the background to complete after all my cross stitching was done and it didn't seem like an overwhelming task. 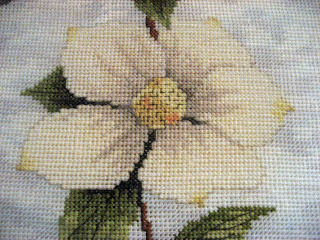 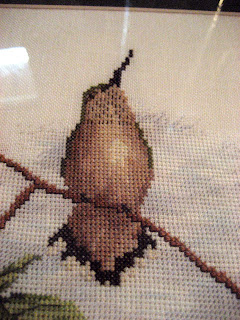 A couple more photos to show the cross stitching up close. Excuse the reflections in the glass. Cross stitch looks great once it's stretched and framed, but it isn't as easy to photograph!