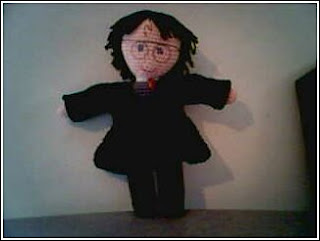 Summer always makes me think of Harry Potter (the books, not the movies). By the time I got turned on to the Harry Potter craze the first four books had already come out and I remember I spent several weeks of that summer tearing through them. Then realizing that like everyone else I had a long painful wait until the next summer when the fifth book would be released. A few days ago I was wandering through a bookstore and I actually had the thought, I wonder when the new Harry Potter book is being released?. Darn J.K. Rowling, she's created a Pavlovian response in me so that when the hot days of summer kick in my brain wants to make its annual trip to Hogwarts.

Last year when the final book was being released my friends and I made a big event out of it. We went and saw an evening show of Order of the Pheonix and then had only an hour to kill before we could line up at the local bookstore to get our copies of Harry Potter and the Deathly Holllows when it was released at the stroke of midnight. It was the first time we'd actually gone to one of the midgnight release parties and it was a lot of fun. In the end the line up proved too long and we were impatient. We snuck out and bought the book at the Zellers department store across that street that had quietly opened for the release and had drawn a much smaller, but equally eager crowd.

Turning back to crochet, there's plenty of Harry Potter related crochet and knitting out there and I've seen lots of dolls and amigurumi of the characters. (Some of them are kinda scary looking!) I reallly like this Harry though, he's cute and looks like he'd be fun to make.

This 12-inch Harry Potter doll was created by Janie and it's a free pattern available here.

And in case you're wondering, my favorite Harry Potter book has always been The Prisoner of Azkaban, with The Half-Blood Prince running a close second.
Posted by amber at 8:00 AM