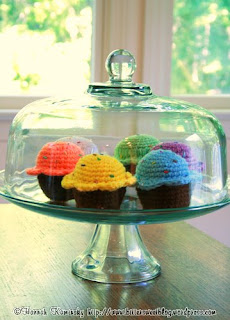 Today is my boyfriend's 30th birthday and as I'm always telling my readers he is both wise and witty. Aside from that he is my biggest supporter, my best friend, and the person that makes me smile every day. He is also an avid reader of my blog even though he doesn't crochet. So in honour of his special day, he is my target audience for this blog entry. I've rounded up a few crafty things I think he'll like, and hopefully the rest of you will find them entertaining too. 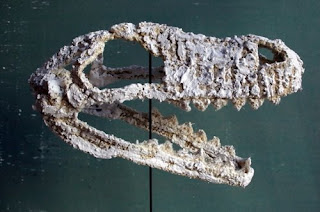 Up first is this Crochet Dinosaur Skull that was created by knittingkneedles and available for brief time in his Etsy shop. As explained on Make:, "This piece was made using 100 percent acrylic yarn, but was also covered with some acrylic paint and plaster to give a bone-like texture. The skull was then sprayed with some matte medium to ensure that the plaster would not crumble too much." 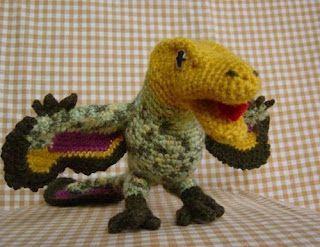 Next, an only slightly more cuddly dinosaur. This Archaeopteryx was created by flickr user 203gow. 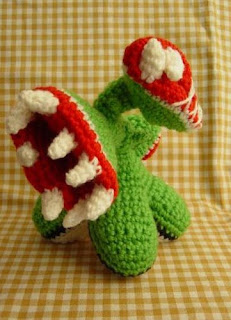 A second piece by 203gow, a Carnivorous Plant. 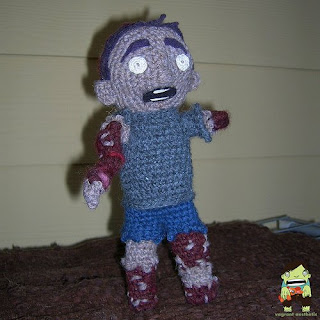 Zombies are always great and I really like how surprised this Zombigurumi looks. Like he still can't quite believe he got bit. Created by Joined at the Stitch. 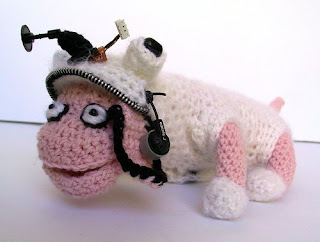 And finally, from the WTF category, this Dog in a Robot Costume made by Neta Amir. Neta used pieces of an old computer and buttons to put together this cyber pup. 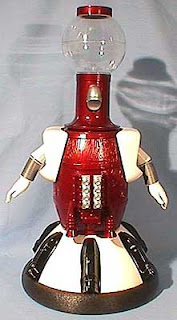 From robot dogs to one of our favourite robots. One of my original plans was to crochet the boyfriend a small Tom Servo as a birthday present. Unfortunately, I could not find the clear plastic ball I needed for the gumball head so that plan is on hold until Michael's gets more of them in stock. Until then you can check out the awesome Tom Servo (and Gypsy!) that mst3kguy has made and his detailed description of the building process. It's not crochet, but it's a pretty awesome craft.

*Virtual birthday cupcakes courtesy of Bitter Sweet's free Bake Me a Cake pattern.
Posted by amber at 12:00 AM

You are one busy little bee! I'm moving back to cross stitch and would desperately love to have the four seasons Teresa Wentzler Carousel Horse patterns. Since these are virtually impossible to get, may I purchase yours if you are finished with them? email me at victoriansnowflake54@yahoo.com