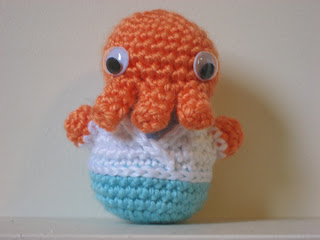 Original credit for this idea goes to Craftster user ThatNanda. It's an adaptation of the cthulhu pattern from Christen Haden's Creepy Cute Crochet which turns the cthulhu into a tiny Dr. Zoidberg, (of Futurama fame.) I made this one as part of the boyfriend's birthday gift. It's simple, mostly just colour changes from the original pattern and I extended the tentacles an extra row to make them longer. The blue V-space under his chin is a triangle of felt that I glued on and I made a long white chain and tacked in place (with the trusty glue gun!) to make it look like the edge of his lab coat. I also worked a white chain all the way around his waist to make the colour change between his pants and shirt look a little cleaner. 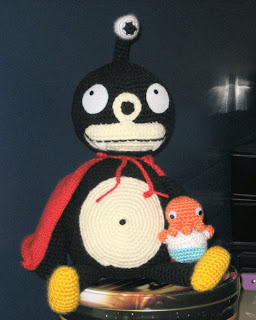 The lighting is a little dark in this picture, but I thought I'd throw it in as a size reference. Let's just pretend there's a lost episode of Futurama where all the major characters get shrunk down and become Nibbler's playthings. In my head I'm already making plans for a tiny Bender to sit on Nibbler's other knee.
Posted by amber at 7:20 PM

Labels: amigurumi, Futurama, I Made This, Nibbler, Zoidberg

The Zoidberg is so amazing!! Do you ever make these to sell? My sister would absolutely love one of these but, alas, I don't know how to crochet :(.

Please let me know if you would consider it, silenscarmina@gmail.com - Thanks!

Can you please sent the pattern of the zoidberg one. I cant find any cute ones like this!