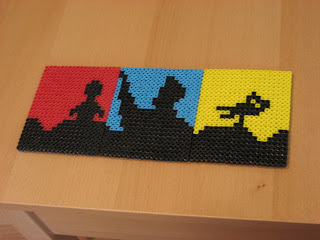 Just thought I'd let you all have a look at these coasters we made as a birthday gift for someone. It was part of a theme, as the gift also included a DVD boxed set of Mystery Science Theater 3000. The coasters are made from Perler Beads and I used the knitted MST3K chart that I had previously featured in this Cute Thing of the Week. 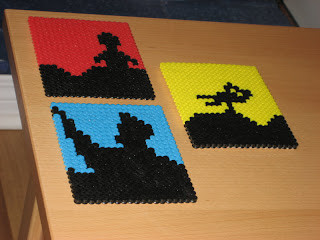 I bought a bag of 1,000 black perler beads from KoolStuff4Kids a few weeks ago and thought that the bag would last forever. Not so much. I used at least 3/4 of it making these things. It was worth it though. I really like the way they turned out and now I'm brainstorming other coaster sets I could make where the coasters look good individually, but set together they form a larger picture. We're also thinking of making a second set of these MST3K coasters, only using glow-in-the-dark beads for the background colours.
Posted by amber at 11:46 AM

Labels: coasters, I Made This, MST3K, Perler Beads

Ahhh! These are so awesome! That is such a cool present. I would love to see some glow in the dark ones, that would be so cool!