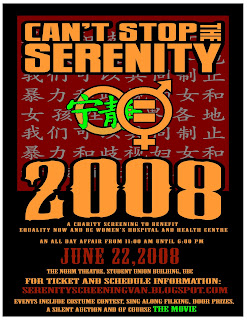 "There are two ways to fight a battle like ours. One is to whisper in the ear of the masses, try subtlely and gradually to change the gender expectations and mythic structures of our culture. That's me. The other is to step up and confront the thousands of atrocities that are taking place around the world on an immediate, one-by-one basis. That's a great deal harder, and that's Equality Now. It's not about politics; it's about basic human decency." -- Joss Whedon

I'm taking a detour from the usual crochet and crafty talk to tell you a little about a charity event that's very important to me. Each June, on or near Joss Whedon's birthday, thousands of fans gather in movie theaters around the world to watch a little movie Joss made called Serenity. Proceeds from the day's screening go to Equality Now, Joss Whedon's charity of choice. In 2006, Can't Stop the Serenity raised over $65,000 for Equality Now. In 2007, that number went up to $114,000. This year the goal is to raise $155,000 and host events in 55 cities globally.

If you're a fan of the projects that I feature on this site then I'm guessing that you're probably also a fan of something Joss has done whether it's Buffy the Vampire Slayer, Angel, Firefly or his recent work in the comics Astonishing X-Men or Runaways. Attending a Can't Stop the Serenity screening is a way to give a little something back for all the wonderful things Joss has given us. Plus, you get to see Serenity on the big screen again. How cool is that?

I will be attending the screening that's taking place on June 22 in Vancouver. To keep up with the planning and order tickets for that screening visit the Vancouver Charity Screening of "Serenity" blog. To find out where else in the 'verse screenings are taking place in 2008 or how you can help host an event in your area, visit Can't Stop the Serenity.

Need a little more incentive to get out of the house and meet fellow Joss fans? Take a few minutes to check out Equality Now and the amazing work they do throughout the world or go to YouTube and watch Joss Whedon's Equality Now Speech. It's only 8 minutes and I guarantee it will make you laugh at least once. It may also inspire you to act. Attend a screening. Make a donation to Equality Now. Tell others about the event. 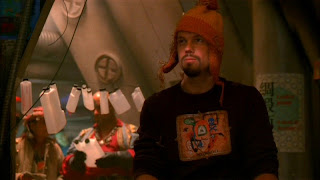 Finally, I'd hate to send anyone off to a screening underdressed. You can make your own knit Jayne Hat using this free pattern available on Craftster that was created by Emisanboo or this one that's available through the Vancouver/Firefly Serenity Meetup Group.

See, it always comes back to crafty stuff in the end!
Posted by amber at 12:14 PM

I'm looking up the site now to see if there's one being held in Chicago, and if there isn't, then I will absolutely look into hosting one myself for this year. :)