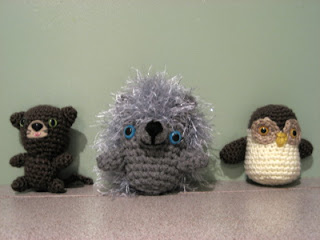 Now that Mother's Day has passed I can show off the tiny amigurumis that I made for the occasion. All of these come from Ana Paula Rimoli's Amigurumi World: Seriously Cute Crochet . I wanted something quick and homemade that I could give to each of the important moms in my life and Rimoli had a wonderful selection of patterns to choose from.

I think the hedgehog took the longest to make because you have to go back and put his coat on after you've stitched the main body. I'm guessing he was about a 5-6 hour project, while the other two came in at only about 3 hours apiece. I bought the Patons Decor in Rich Taupe especially for the owl, but aside from that I managed to use up bits and pieces of colours I already had. 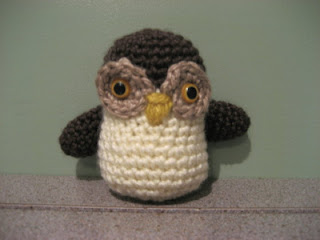 First up is the owl which I made for my Grandma. She collects owls so he was the obvious animal choice for her. I'm really happy with how he turned out. I think I actually like him better than the sample owl that was in Rimoli's book. His beak is a bit of leftover Vanna's Choice in Mustard and the rest of him was made using Patons Decor in Rich Taupe, Taupe, and Aran. 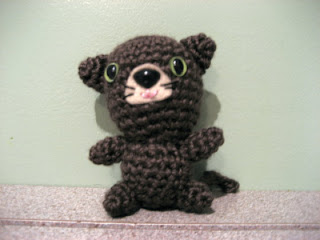 This cat was made for my Mom who loves cats. Does it look like a cat? I'm a little worried he looks more like a bear than a cat. In his defence he does have cat's eyes and a long tail. More of the Rich Taupe here. I originally tried to make him in grey, but my grey wool was too thick for the small hook you need to use on these Tiny Amis. Trying to make him in grey was very uncomfortable so I switched to brown. 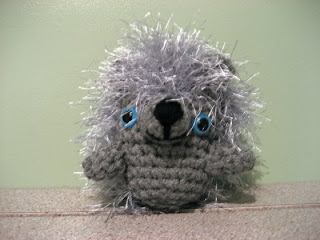 The hedgehog was made for my boyfriend's Mom. I let him choose from several different animals and he went with the hedgehog. The whole time I was making it I was worried it was going to be a disaster and to be honest it really didn't look good until the end when I had all the pieces sewn on. Now I'm becoming more enchanted with it every time I look at it.

Rimoli's pattern uses worsted weight for the coat as well as the animal's body, but I switched this for some fun fur that I had on hand and I quite like the effect. The fun fur was a generic brand that's sold by Dollarama and since I was using a larger hook for this pattern I could use my grey. It's a Bernat Super Saver colour. I should also note, the pattern seems to indicate that you stitch on the coat after the hedgehog is stuffed. I chose to make it before stuffing because I was afraid that if I did it after, my hook would catch on the stuffing and accidently pull some of it out. 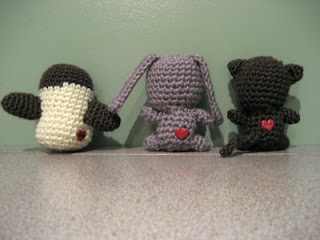 My Ami bunny snuck into this final picture. I couldn't resist including this butt shot because I wanted to show off what I've been doing with the backs of these critters. I picked up these little heart shaped brads at Dollarama back at Valentine's. One box of plain hearts (like the bunny has) and one with words on them. Both the owl and cat have the word "love" on their hearts. The fun fur made it too difficult to put one on the back of the hedgehog. I thought of putting one on his chest, but he's so small, I just felt like it made his front side too busy. Nonetheless, he too was made with love.

If anyone is interested I've started an Amigurumi World Crochet Along on Craftster. You can post pictures of projects you complete from the book there and discuss the patterns with fellow crocheters.
Posted by amber at 8:00 AM