Flying Homer and the Three-Eyed Fish 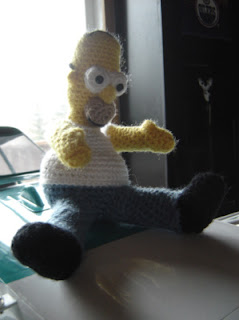 With The Simpsons celebrating its 19th (!) season finale tonight I thought I should give a little love to Matt Groening's other masterpiece for a change. I have to admit I'm not that well versed in the Simpsons. I've seen it, I like it, I saw the movie in theatres, but I'm probably the last person you'd want to pick for your Simpsons trivia team. In my world it's always been the lesser cousin of Futurama. Even so, occassionally when I'm tired I'll watch an episode because I know it will make me laugh at least once, which is all I'm really looking for.

I have to admit I was a little surprised that my Google and Etsy searching didn't turn out any crocheted sets of the Simpson family. I may have to tackle a crocheted Maggie someday since she's always been my favourite. In the meantime, we have these two crochet projects that I really like.

Flying Homer is pretty cute and I think Craftster member Chubby Pixie did a great job of replicating the Groening mouth, which is always hard to mimic in crochet. However, I love the story behind this Homer as much as the actual doll. Chubby Pixie made him specifically to serve as the pilot in her husband's remote control plane: 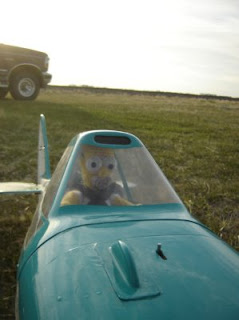 Craftster member knifinaround came up with this great rendition of Blinky, the three-eyed fish from the Simpsons. She didn't write down the pattern for him, but if you visit the original discussion on Craftster she has given a general description of how she put him together. Very cute! 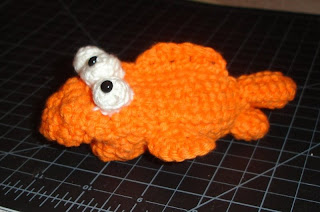 Homer never looked so cuddly. I love him! And the three eyed fish is hilariously cute!