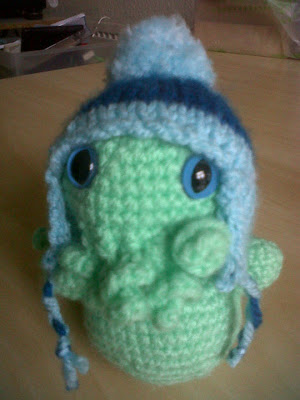 Apologies to Rachel, whose wintery little cthulhu somehow got left out of my final round up of 2010 cthulhus. Rachel shared a great story about this little guy too, so I'm really sorry he got left out.
The hat this cthulhu is wearing comes from the Innocent Smoothies Big Knit campaign, which Rachel takes part in. Being in Canada, I hadn't heard of this UK charity before, but as Rachel explains, "[it] involves knitting tiny hats to go on the top of Innocent Smoothie bottles. The hatted bottles are then distributed to our local supermarkets, and a small amount of the sale goes to Age UK, a charity to help the elderly."
What a great idea! We don't have Innocent Smoothies in the stores around here, but I know if I saw a drink with a little knitted hat on it at the grocery store, I'd buy one, especially if it was helping out a charity.
And now a few other great cthulhus that I've received in the past couple months... 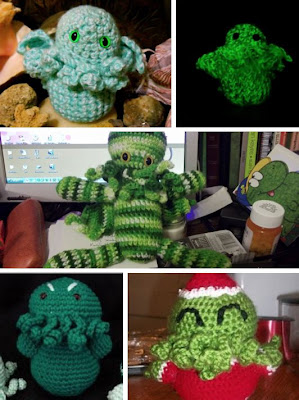 Remember when I was asking readers what they thought of glow-in-the-dark yarns? Well, Rosemarsh Art decided to test some out on a tiny cthulhu. In the top left photo you see how her cthulhu looks in the daylight, and in the top right photo you can see his glow. Very cool, and kinda creepy looking!
In the middle photo we have a beautifully striped cuddly cthulhu from Terra-Storm. That angry cthulhu you see in the bottom left was stitched up by Ginny, and Knotical Knits created the jolly Santa-Cthulhu on the bottom right as a gift for her sister-in-law last Christmas.
Once again thanks to everyone for sharing their creations. As always, if you've made something with my patterns feel free to share a link in the comments section on the pattern you used or send me an email at the address you see in the top left corner of the blog.

Awesome Cthulhus! I am delighted to be a part of them. Thank you so much!

Thank you so much for featuring my Cthulhu! He is very honoured and I shall be making him a new hat for this year aswell! =]

Hi Rachel, as I said before the hat makes him incredibly adorable! I bet some day he'll be up to having a different hat for each day of the week, if he isn't already:)