What I Did on My Summer Vacation - Victoria, BC 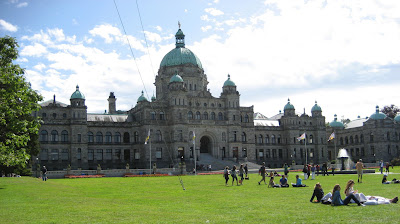 If you're a crafty geek then Victoria, British Columbia is a wonderful place to visit for your summer vacation. Back in July the boyfriend, who is both wise and witty, and I were able to get away for a few days to this great city.
We stayed at a hotel in the downtown core where we had not one, but three different comic book stores and right across the street. There are also numerous bookstores, for both new and used books, and at least 3 different yarn stores all in or around the downtown core.
We parked the car at the hotel the first day and then walked everywhere for the rest of the vacation, which was a treat in and of itself. We also ate lots of wonderful food and spent a day at the Royal B.C. Museum, where they had a pretty interesting feature exhibit on the life of Emily Carr.
I'd love to say I took lots of fabulous pictures of the sites and scenery, but the truth is I only took the picture of the parliament buildings that you see above and a couple other pictures. So instead, I'll tell show you my vacation through the awesome fibres I was able to pick up during the trip. 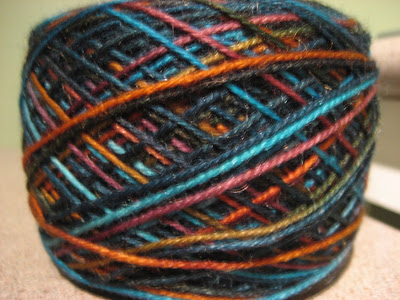 Considering the one local yarn shop in my town packed up and moved to a new city, I was pretty impressed to find three independent local yarn shops in Victoria, each with their own unique style and line of products.

The first one we visited was Knotty By Nature where I picked up this Kidazzle hand dyed 70% Merino/20% Kid/10% Nylon yarn which is made by Fleece Artists, in Mineville, Nova Scotia. This stuff feels incredibly soft and has a beautiful assortment of colours in it. Sometime this fall/winter I'm hoping to knit some of it up into a pair of fingerless gloves.
Knotty By Nature focusses heavily on natural ec0-friendly products. It has a large selection of hand-made products, many of which come from spinners throughout Canada. 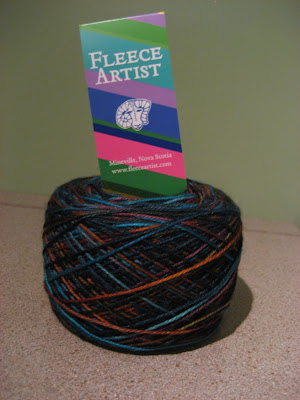 I was also really excited that the store had a mechanical skein winder (first time I'd ever seen one of these!) and in only a couple minutes they were able to transform the skein I was purchasing into a workable ball of yarn for no extra charge! Those who read Cthulhu Crochet and Cousins regularly know of the headaches I've had trying to wind skeins into balls.
Next on our yarn tour was The Beehive where I picked up this unusual, and extremely soft skein of Bonsai Colors, which is a mix of 97% Bamboo and 3% Nylon. I only bought one skein of this and I have no idea what I'm going to do with it, but it was so unusual I couldn't resist getting some. 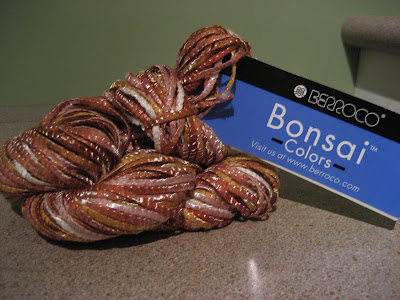 The Beehive is a fairly large 2 room store that carries a good selection of yarns. There were a lot of hand dyed/spun products, as well as products from well known manufacturers like Patons. I think it's a yarn shop that could fit any budget and any skill level of knitter/crocheter. They also had a mechanical skein winder, and when we came in one clerk was in the process of winding several skeins for a woman who was buying enough wool for a sweater. 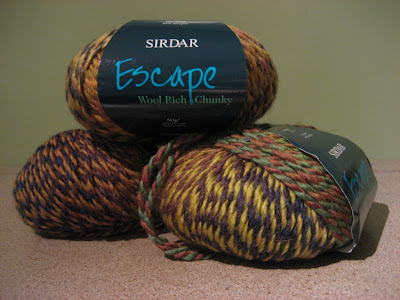 While at The Beehive I also purchased three balls of Sirdar Escape chunky which is 51% wool/49% acrylic. I'm not sure what I'll make with this, but I really liked the mix of colours in these balls so eventually I'll come up with something.
The last stop on our yarn store tour was the Button & Needlework Boutique, though truth be told, I think I went in here 2-3 times during our trip, trying to decide what I should buy. 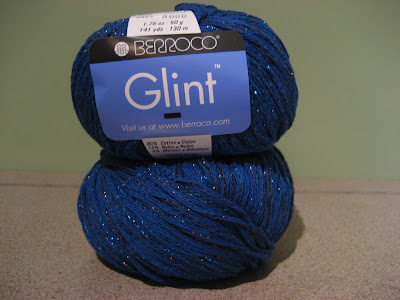 This store carries a variety of crafting materials including yarn, cross stitch supplies and a large selection of buttons (hence the name). I was impressed that not only do they carry a lot of cross stitch patterns, they also have a framed, stitched copy of every pattern they sell. Anyone who has ever stitched a large cross stitch picture knows how long it takes to complete, so having one finished for every pattern the store carries is a pretty big achievement.
I finally settled on getting three balls of Glint yarn in blue from the Button & Needlework Boutique. It's a blend of 80% cotton, 12 % Nylon and 8% metallic. What can I say? I liked the way it sparkled in the light. Again, I'm not sure what I'll make, but something will come up.
I also picked up a copy of the cross stitch pattern for Vancouver Island artist Sue Coleman's Cougar Kitten. I'm looking forward to finding some time to stitch it! 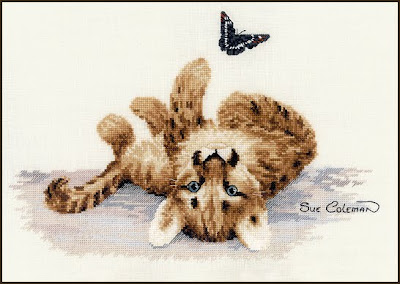 And that is how I spent my summer vacation! We had a lot of fun, and I came home with a suitcase full of books, comic books and lots of crafting supplies to keep me busy!

I love the crafty/geekness of Victoria, which is why I chose it for our honeymoon 7 years ago! Whenever things get really tough at home, or work, we always joke about moving there and starting over. Who needs tropical beaches when there's bookstores and Butchart Gardens?

Hi Lily, yes, the whole time we were there we talked about how fun it would be to live there. We didn't make it out to Butchart Gardens this time, but it was always a family staple when I went on summer vacations to Vancouver Island with my parents as a kid.

I love Glint! It works up beautifully. I've knit and crocheted with it. I've made a scarf, a headband, and two bracelets out of it!