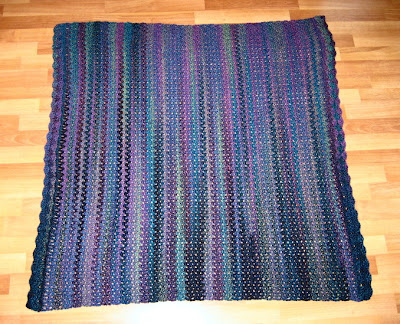 I had to put this one aside for a while because it was just too warm to be crocheting a wintery afghan. It's based on the Cottage Decor afghan in the July 2011 issue of Crochet! magazine, only I opted to use a variegated yarn rather than creating solid stripes with multiple balls of yarn.
The yarn is James C. Brett marble chunky in Jeweltone, which I was lucky enough to pick up at a buy 3, get the 4th ball free sale while visiting the awesome Crafts N' More store in Steveston, BC. 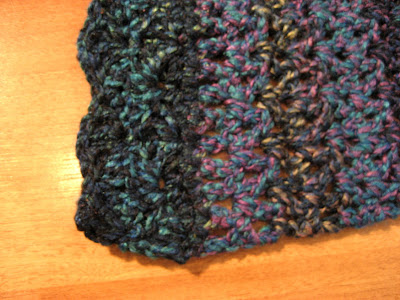 The blanket is a dream to work up, especially if you want something a little mindless that you can work on while focussing on something else. It's stitched with a size J (6 mm) hook and is essentially row after row of V-stitches. Then it's finished off with a fairly simple shell border on two opposing sides. 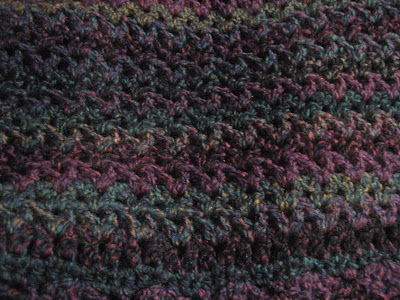 It's simple to stitch, but comes out looking quite fancy. I had fun making this and really love the shades of blue and purple in this Jeweltone yarn, although I don't think I really got a photo that shows them accurately. Hopefully you get the idea!

Labels: afghan, crochet, I Made This

Hello Amber!
I'm Nia, the administrator on Margaret Sherry's Fan Blog :) I answered you on the blog, right next to your comment. I have no idea what happened to your emails, I always reply to everyone! =/ Please, send me your email again ;)

You can check your mail box ;)
Oh! And let me know if you would like to join our SAL #2 too :)
Hugs&Smiles, Nia