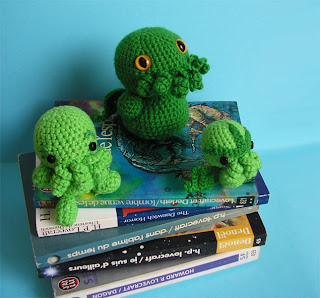 And we're back! Apologies for the extremely long delay in new posts here at Cthulhu Crochet and Cousins! A new job, a broken home computer and numerous other things have been keeping me away from the blog for far longer than I intended. During that time I've still been crafting so I'm hoping to get back on a regular posting schedule and show readers some of the things I've been working on.
Before I start posting my own creations though I want to show off some fantastic cthulhus that others have been making with my patterns. I know it's quite belated, but these are the last few cthulhu pics that I received from readers in 2010.
First up, in the top lefthand corner we have three wonderful cthulhus from Sophie. If you click the link you can see some larger pictures of each cthulhu and check out the wonderful details she's added to give them character. 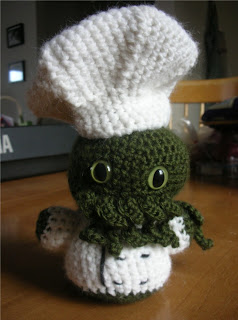 Ruth is a frequent stitcher of my Tiny Cthulhu pattern, whose works I've shown on the blog before. She's now taken to creating what she calls a Cthulhu expansion pack, which includes cthulhu dressed as a Battlestar Galactica Cylon and this adorable little chef. He may be cute, but I'd hate to think what he'd serve me for dinner! 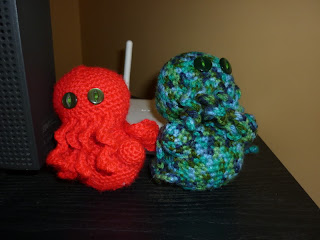 Above are two button eyed cthulhus created by Takanno, who stitched up a bunch of Tiny Cthulhus for to give to friends as Christmas presents. 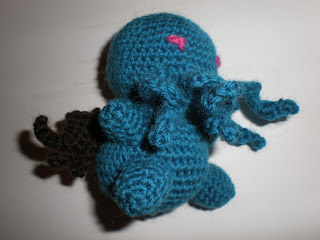 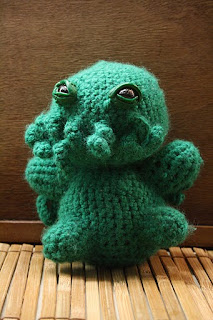 I'm always struck by what a difference the eyes can make on the appearance of an amigurumi pattern. Above Valentina has added eyelids around her safety eyes, while in the picture below Ohmie has stitched a cthulhu in nearly the same colour, without the eyelids. It really seems to change the tone of the cthulhus face and would be a great way to add character if you are making a whole family of these guys. 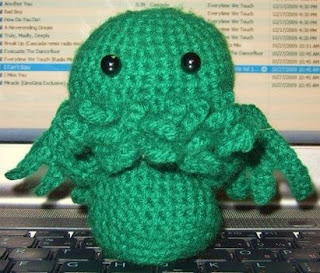 We now move on to look at a few cthulhus made using the Cuddly Cthulhu pattern. First up is this cuddly pudgy cthulhu that makm stitched as a Father's Day present. 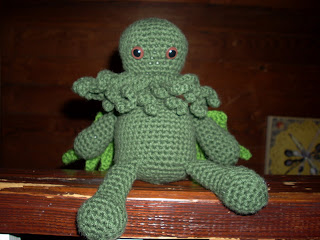 Below are a terrific pair of cthulhus that Jennifer says were her kid's "favorite [Christmas] present this year!" Wow, cthulhus for kids, fathers, friends and secret santa gifts. Who knew cthulhu could be the present that's good for everyone and every occasion? 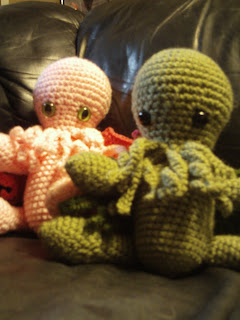 And we close out 2010's cthulhus with this cuddly blue cthulhu created by Carol. She mentioned that she's a long-time reader of Cthulhu Crochet and Cousins and finally found the time to make a cthulhu for herself. It looks like he'll be a great companion while she works on other crafty projects. 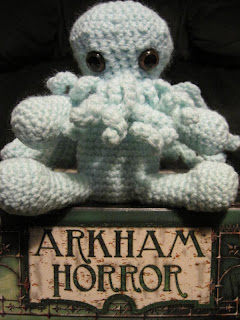 Once again, thank you to everyone who has posted a link to show how they've used my patterns, emailed me a jpg of their creations, or left a comment on the blog saying they enjoyed using my patterns. Even when I haven't had the time to post anything I've still been reading all the comments, checking the email account linked to the blog and trying to answer as many questions about the patterns as I can. It's really rewarding to see that people are still using and enjoying the free patterns that I've posted here.
So, as always, if you've made something using one of my free patterns, feel free to share the news by posting a picture link in the comments section for the pattern you used or sending me pictures at the email address you see in the top left corner of the blog.
Happy stitching everyone!
Posted by amber at 12:11 PM

These are just too cute! I desperately would love to make some myself, but I can't crochet to save my life! Do you know of any cute knitting patterns, or good "How to Crochet" sites? I'd really appreciate that!

I love your Cthulhu pattern. I made one for my sister-in-law last year for Christmas http://knoticalyarns.blogspot.com/2011/01/christmas-crochet.html I think it turned out really well. Have a look :)

I had a look at the Kickstarter and the guy actually credits his cthuhlus as being made from my pattern and provides a link to the page on my blog where the pattern can be found. When I post a pattern for free, people are welcome to take it and use it however they want, so I don't in any way feel "ripped off" by him.

Thanks for reading Cthulhu Crochet and Cousins, and happy stitching,
amber