It's so Fluffy!!! My First Slicker Brush Project... 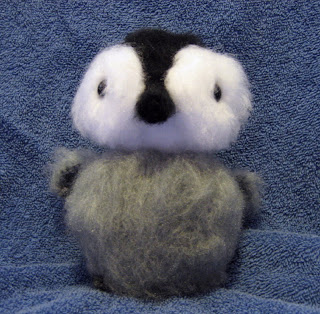 I know penguins are a little out of season for July. Maybe if you're sitting somewhere hot right now then just seeing this sweet little guy will help cool you down. This is my first crochet endeavor made using Roman Sock's Brushed Crochet technique and I am so happy with the results. Would you believe this yarn is just Vanna's Choice brushed out with a pet slicker brush? At first I wasn't sure if it would work, but as you can see it turned out pretty fluffy!
I accidently got a little carried away and brushed the body so vigorously that it tore a couple holes in the crochet. Ironic since the body was the last piece I brushed. You'd think I'd have been more likely to damage the first piece. Overconfidence, I guess. The wings are set a bit further back on the body than I would have liked so they cover up the holes and so I could use the attaching yarn to sew the holes shut. I wouldn't want poor Penny leaking stuffing everywhere. 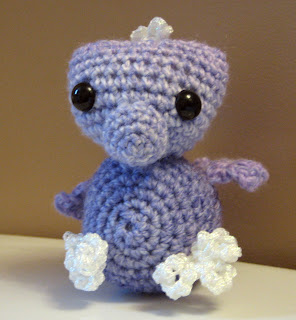 The pattern comes from Brigitte Read's (aka Roman Sock's) amigurumi book Super-Super Cute Crochet . I borrowed this one from a friend for a while, but it's definitely on my "to buy" list. There are a lot of designs in here and the photography is wonderful, showing most of the animals from several different angles. That's always an asset when you're trying to figure out the placement of wings, limbs or tails. Many of the patterns are the ones that Roman Sock sells individually online, but there is some new stuff here as well.
I was also pleasantly surprised to find out that not all the patterns in the book are brushed crochet. There are some terrific regular crochet amigurumis in here like this dragon. In hindsight I wish I'd crocheted his legs (yep, those are legs sticking out at the front) in the same colour as the body rather than using the iridescent cord I used for his spikes. Ah well, next time. He's pretty cute this way too, just a little stranger looking. 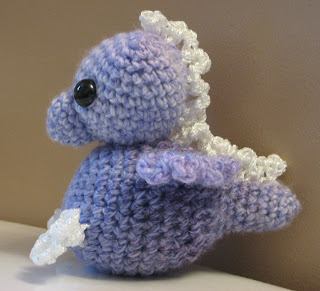 In the book the dragon is red and green and described as a being similar to a Chinese Fire dragon. I'm thinking of mine more as a water dragon. The body was crocheted using some of the James C. Brett's Marble in Amethyst I had leftover from this afghan.
Posted by amber at 12:22 PM

Labels: amigurumi, I Made This

I love them Ill have to check that book out!

Love that dragon soooo much!

eeeks the penguin is so cute! >.< I have that book too. I might just give the penguin a try :)