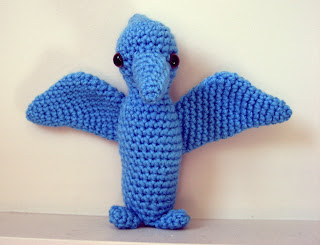 My boyfriend, who is both wise and witty, is obsessed with dinosaurs, and while I'm not the expert he is, I think they're pretty great too. So we were both really excited to hear that June of PlanetJune had reached 1o0 sales with her first set of dinosaur patterns and was releasing a new set of three in celebration.
The boyfriend, who appreciates accuracy when it comes to all things dinosaur, was also impressed that June had done her research and knew, "neither Plesiosaurs nor Pterosaurs are actually dinosaurs! The term ‘dinosaur’ correctly covers only a certain type of terrestrial reptile with an upright stance, so Plesiosaurs and Pterosaurs are simply related reptiles that lived in the same time periods as the true dinosaurs."
That sold us and here before you is Pterry who was made using June's wonderfully easy to follow Pteranodon pattern. For this one I used Vanna's Choice Baby Yarn in Little Boy Blue. Later I'll have to make a smaller one in a variegated Kroy Sock yarn so that our stegosaurus can have a matching friend.
Want the Pattern?
The Pteranodon pattern is available as a pdf download from the PlanetJune Store for $5.00 U.S. or you can save money by ordering the new set of 3 dinosaur patterns for $12.50 U.S.
Posted by amber at 11:22 AM

Labels: amigurumi, I Made This

I love to see some dino-accuracy! You and your b/f rock!