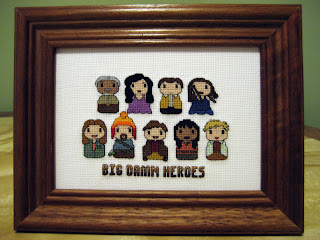 Readers may recall that I was donating some of my Firefly cross stitch pieces to various Can't Stop the Serenity screenings throughout Canada.
After successful screenings in Vancouver, Edmonton and Toronto, I can now happily announce that my cross stitches raised a grand total of $438 for Equality Now and the other sponsored charities in each city.
To say I'm overwhelmed by this total would be an understatement. I'm in awe of how generous my fellow Browncoats were in their bidding and really pleased that my cross stitch pieces were able to bring in this much money for our charities.
The Big Damn Heroes cross stitch above was the highest seller. It was in the auction at our Vancouver screening and went for $110. 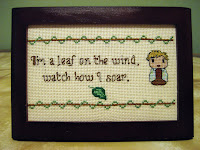 Also at the Vancouver screening, this Wash piece sold for $85 and the River one went for $63. 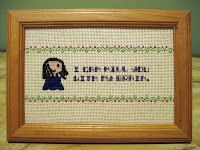 Here in Vancouver Jayne was paired with a Jayne Hat tea cozy and sold for a total of $60. The Jayne cross stitch that I sent to Toronto was included in their Jayne package which also contained a Jayne Hat pin and Blue Sun T-shirt. That package sold for $80. 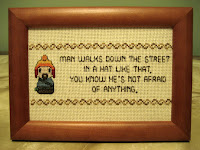 Edmonton had a smaller screening than the other two cities, with just under 100 people in attendance. They were pleased to raise $40 through the sale of this 3 character Big Damn Heroes cross stitch.

I wanted to share how well each piece did in case there are any other crafty Browncoats out there who were thinking of making something for a screening in their area later this year or even next year.
In general supplies for each piece cost me under $15 each and all the pieces I made earned far more than what I put out on supplies and shipping. As to the time I spent stitching and framing, I consider that my donation to the cause.
So if anyone is on the fence about making something like this for their own charity screening, I highly recommend it. All three organizers told me that the unique homemade items are always a high seller at their auctions.
In closing, another big thank you to everyone who bid on these pieces and to everyone who provided me with feedback about the designs through the blog, on Craftster or in person at the Vancouver screening. To anyone interested, the patterns for cross stitching the Firefly cast members are all available free on the blog under the My Free Patterns heading.
Enjoy and stay shiny!
Posted by amber at 11:46 AM

Thanks again, Amber, for your generous donations. The pieces were well-received and there was some frantic bidding on them.

Unique, homemade items do indeed sell well at the silent auction and I'm glad you're encouraging others to donate in the future. :)

Fantastic, Amber!
Thanks for letting us know.

These are wonderful. I was in Toronto and lusted after the Jayne stitch, but had no idea you had made others for the other screenings.

I'm also a stitcher, and you can bet I will snag those patterns. You are too generous to offer these.

These are SO SO cute! Are you selling these? I would love to stitch some up for some friends!