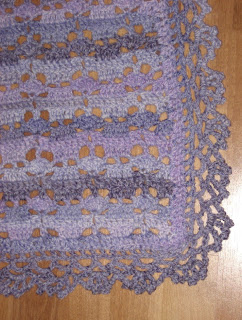 One big project down, several more to go! I guess it's becoming a bit of an annual tradition to spend some birthday money on yarn to make an afghan for myself. This blanket is the Lime Lace pattern from Heirloom Afghans and it's this year's special treat for myself. Now maybe it's just me, but it seems like it may be a bad idea to name a blanket after the colour of yarn you used. After all, how many people are actually going to want to make it in that same colour?

While I wasn't a fan of the lime colour used in the book, I really liked the look of the pattern. I tend to make mostly solid blankets, so making something a bit more lacey and airy was a nice change of pace. I decided to start with the corner picture first, as it gives you a better idea of what the pattern looks like than the photos that show the whole blanket.

Unfortunately there wasn't really a good photo of the pattern's 5 round border in the book so I really had no idea how it would turn out until I was finished. Thankfully, I liked it's frilly look. Although if someone wanted to save time or yarn, I think the afghan would look good without it as well. 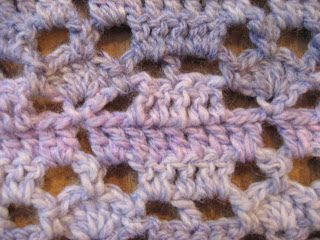 The yarn used was James C. Brett's Marble Amethyst in DK weight. This is the only acrylic that my local yarn shop is willing to carry and it is quite beautiful. It's very soft and is rumored to become even softer the more you wash it. Time will tell if that turns out to be true. I found it does try to split a bit when you're crocheting with it, but I've worked with far, far worse. Considering it's rather reasonable price of approx $6 per skein, I can live with a little splitting. I've still got most of one skein (out of 10) left so you can probably expect an amethyst cthulhu or some other amigurumi to pop up here soon. 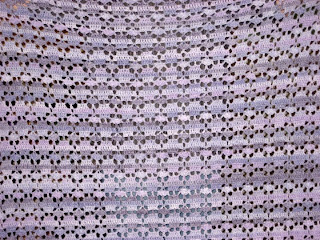 I've forgotten exactly when I started this one, but I'm going to guess it took me about 2 months of on and off crocheting. I do know the border alone took me 2 weeks, which was making me a little crazy (crazier?), particularly when I was uncertain how it was going to look in the end. Below you can see the finished blanket in its entirety. It measures about 4 X 6 feet, which is a substantial size. Doubled over it makes a pretty cozy lapghan. The whole piece is worked in rows back and forth, and then the border is worked in rounds along the outer edge. 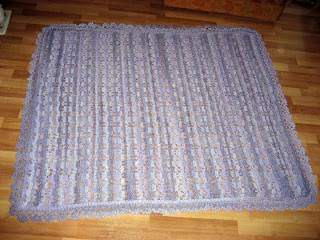 Has anyone else made any patterns from Heirloom Afghans? I've had the book for a while now, but this is the first thing I've made from it. If you see this book in a local craft store take a moment to browse through it. There are a lot of patterns and many of them are very nice. Admittedly there are also a couple of truly ugly patterns in there too. What convinced me to buy it was the variety available in its patterns. Rather than just being filled with lacy patterns, or motif based afghans, the book has seven sections each devoted to different styles of blankets from bulky to airy. It gives you a nice selection all in one book.
Posted by amber at 4:02 PM

Labels: afghan, crochet, I Made This