A Hippopotamus for Christmas! 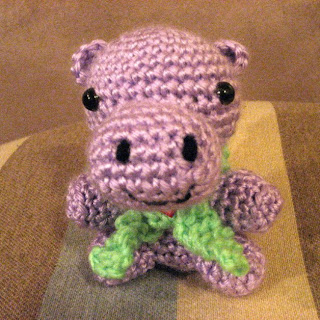 A couple years back a local phone/internet provider garnered a lot of attention with their television ad featuring the song I Want a Hippopotamus for Christmas and a hippopotamus from our local zoo wandering around on the screen. People were so taken with Hazina the hippo it caused a surge in kids wanting toy hippos for Christmas and links to the ad got passed around via e-mail to people all over the world. You can view the original ad here.

Anyways, I'm a couple of years late, but I finally managed to give my boyfriend's mom a hippopotamus for Christmas. This one is another cutie from Tammie Snow's Tiny Yarn Animals which I reviewed last week. I added the scarf so he'd be prepared for the winter weather. My boyfriend, who is both wise and witty, pointed out that it actually looked more like a hippopotamus once it had the scarf on. I'm not sure why that would be the case, but I have to agree.
Posted by amber at 8:00 AM

Labels: amigurumi, I Made This, special occasion