Now that the Christmas presents have been given out and I won't ruin the surprise I thought I'd share a few of the gifts I made this holiday season. My original intention was to give everyone at least one homemade gift. I worked on a few of them during the summer, but once school started, I just didn't have time to actually finish making something for everyone. Here are a couple that I did manage to finish and I'm deeply thankful to NeedleNoodles for sharing her Creepy Cute Cross Stitch patterns. It's been a while since I've done any cross stitch so it was nice to be able to start with something small. 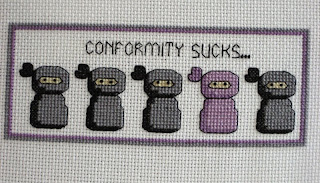 The pictures were taken while these were still on the loom. Afterwards I cut them out and attached adhesive felt to the backs of them, turning them into bookmarks. (Click on the pictures if you want to see a larger version.)

I used NeedleNoodles basic patterns and then made them my own. These were presents for my two best girlfriends so I chose sayings that I thought would suit them and made a couple of minor changes to the colours in the original patterns. For the light grey on the ninjas I used DMC 414 because I wanted them to be a little lighter than the pattern recommends. The purple ninja is DMC 209 and 208. I've never been very good at making French knots, but these ninjas certainly gave me a lot of practice!

I wanted the vampires to be reminiscient of Spike and Angel from Buffy the Vampire Slayer. I used Ecru for the skin tone and for Angel's hair I used DMC 938 and 898. Spike's hair is DMC 3045 and 3046 and that tiny blue patch on his shirt is 931. I couldn't resist adding the bit of blood and frown to Spike. He doesn't like being cross stitched and he's not happy standing this close to Angel.
Posted by amber at 12:05 PM

I love the Spike and Angel bookmark. Very nice work :)

Ahhh, they're fantastic! Great work, I love the ninjas. Must get back into cross stitch next year, think I've lost the plot a bit with the crochet...(http://www.crafts.carolinewood.co.uk/2008/12/back-in-mists-of-time.html) ;)