Want to Roll the Katamari Ball? 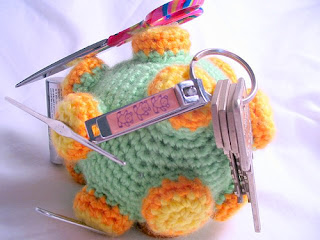 If you don't know what a Katamari ball is you're probably just going to think I'm crazy after you hear the explanation, but here goes. The ball comes from the Japanese video game Katamari Damacy that is available for various gaming platforms. It's a very sticky ball that you roll around the screen picking up things in your path. In the beginning your ball starts out small and you can only pick up things like paper clips and tacks. As the game goes on your ball gradually gets bigger and bigger and you can pick up larger objects like dogs, cats, umbrellas, people, and in the final levels even buildings, pieces of land, dinosaurs, and Godzilla-like monsters (remember, it's Japanese.) There's also a whole storyline in the game about how you're the Katamari Prince and you're rolling these katamari balls around to try and impress your father the King of the Cosmos, who is almost never pleased with your efforts no matter how spectacular you think they are. 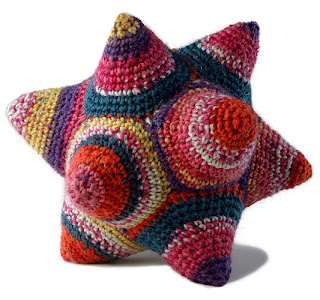 I know, the more I say the weirder it gets but trust me, it's addictive. The game has a great physics engine and your ball actually rolls differently depending on what you've picked up. For example, stick a pair of chopsticks on one side and it rolls in a lopsided manner. As well, the tiny starter Katamaris actually feel lighter and easier to move than the larger more cumbersome ones you build later. They are harder to push giving them the illusion of being physically heavier. Levels throughout the game come in a wide range of time increments with shorter ones lasting only a minute and larger ones taking up to 25 minutes or more to complete, so you can squeeze in a little Katamari rolling even if you only have a few minutes to spare. 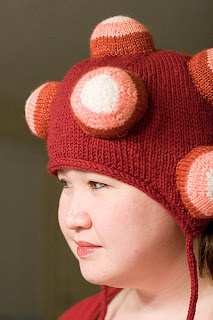 I saw Amy's Magnetic Katamari Ball a year ago (?) on Esty or Craftster or somewhere, but at the time there wasn't a patttern available. I was very excited the other day when I accidently stumbled across the free instructions she's created for the magnetic Katamari. Also pictured here is the Dodecahedron pattern from Berroco. It's worked all as one piece which intrigues me. I think if I smoothed out the ends points a bit it could be quite Katamari-ish. Finally, if you love Katamari and aren't afraid to show it, you can make this Knit Katamari hat using the tutorial advice available on Strangepath (It's there. You may have to scroll down a bit to see it.)
Posted by amber at 4:09 PM

I just wanted to say that I love your blog. Ever since you posted your Nibbler on Craftster I have been addicted to your blog.
ANYWAY, just wanted to point you in the direction of another katamari craft, although it's not something I think anyone would actually wear--http://www.shojobeat.com/diy/
It's down in the "Knitting Pretty" section.
Great post! Great to see some katamari love.

I tried to access the pattern for the katamari hat, but it just gives me a forbidden 403 error. Even when I try to just go to strange path. I'm not to computer Savvy so I am not sure why this would happen :( (My friend LOVES katamari. I was really excited to find some patterns on your blog!!)

Hi Anonymous, I'm sorry I can't seem to access the hat pattern through that link anymore either. I originally wrote this post about Katamari crafts back in 2008. So perhaps the site has been shut down since then?