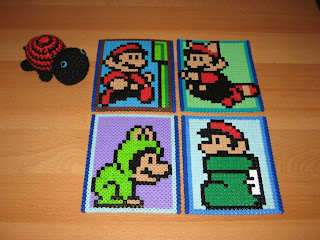 I've been wanting to play with Perler Beads since back in the autumn when I first saw Artoo1121's post on Craftster about the Nintendo Perler Bead Coaster Set that her boyfriend had made. Then a few weeks ago when I stumbled onto Sprite Stitch's weblog and specifically his Mario across the NES ages (revised edition) I knew it was really time to stock up on Perler Beads. Super Mario 3 has to be one of my all time favorite video games, probably because of all the costumes Mario gets to wear. I used a couple of the charts from Mario Across the Ages and a couple of the other free charts that Sprite Stitch had available on the site. (Check them out, it's a great trip back to the 80's!) 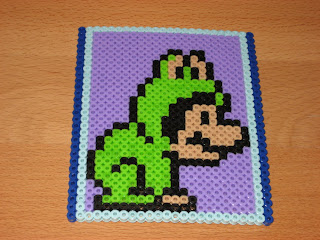 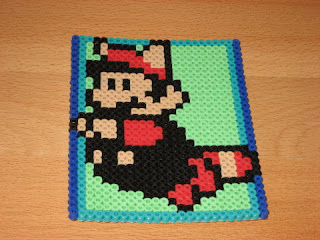 I had the fun job of actually positioning all the Perler Beads on the plastic peg board (kind of soothing actually, it's hunting for the colour you need in the giant jar of mixed beads that's the frustrating part.) My boyfriend, who is both wise and witty, gets the credit for ironing the beads to fuse them together and for glueing cork to the backs of each picture to make them more stable. Now, 2,784 Perler Beads later, we have our own set of Nintendo coasters. They're a little larger than your standard coasters, but the Mario charts were just too cute to resist.

Now I just have to decide what to do with the 8,216 beads that were left over. 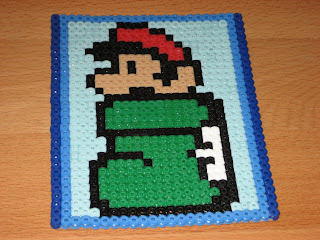 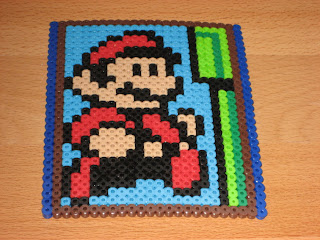 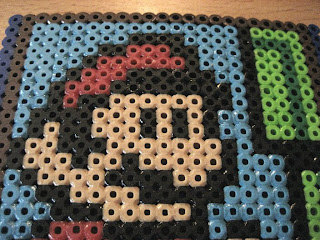 This last picture is taken with the digital macro setting on the camera so that you can see what the coasters look like up close. It's not actually a solid mass of colour, the beads still hold their shape even once they're melted together.
Posted by amber at 11:28 AM

Labels: coasters, I Made This, Perler Beads, Super Mario

Those are so cute! I especially love the little raccoon Mario.