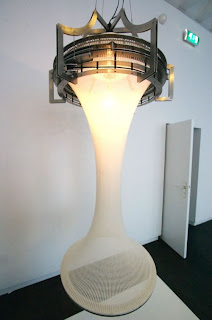 Nadine Sterk is the creative mind behind Sleeping Beauty this incredible lamp that actually knits its own shade. The lamp garnered attention back in 2006 when it was part of the Dutch Design Week’s Graduation Galleries 2006 and was recently part of the Family of Form exhibit at the Design Huis in Eindhoven, Netherlands. It's described as "a lamp that develops like a living organism; switch it on and it slowly starts growing by knitting its own lampshade at a speed of three rotations per hour." How cool is that?

I spent a good half hour flexing my Google muscles to try and find out more about this amazing creation and the artist behind it, but all I managed to turn up was this second photo that shows the lamp at an earlier stage in its knitting. 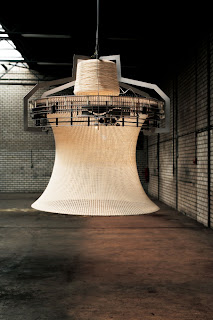 Being craft-minded I wanted to find out a bit more about that knitting process. For example, is this actually knitting? Is the lamp using knit or purl stitches to join the fabric together? It's a shame there are no close-ups of the fabric its creating. Second, is this done with a material that a human would use to knit or does the process require a stronger fiber, a rope rather than a yarn perhaps? Finally, how loud is the machine? Is this something you could set in the corner of your living room or would the noise it makes prevent you from hearing your television set?

I'm curious, so if anyone happens to be checking out Cthulhu Crochet and Cousins from the Netherlands and you've actually had the opportunity to see this exhibit in person leave me a comment and tell me more about it.
Posted by amber at 11:14 AM