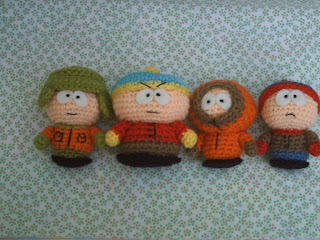 Trey Parker and Matt Stone announced earlier this week that South Park will soon be available to fans everywhere for free. The newly revamped South Park Studios will allow people to watch full episodes from the show's twelve seasons online. Revenue from the site will be generated through advertising. As Stone told Boing Boing in a recent e-mail, "Basically, we just got really sick of having to download our own show illegally all the time. So we gave ourselves a legal alternative." 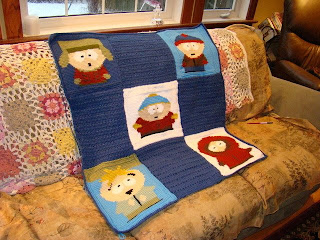 Parker and Stone want the episodes to be available worldwide, but there's still some red tape to cut and hoops to jump with international cable channels before that can happen. Indeed, when I tried to access the episodes, I was stopped by a message from Terrance and Philip telling me, sorry Canada free episodes coming soon. Nevertheless, I thought this would be a good time to show off some of my favourite South Park releated crochet. 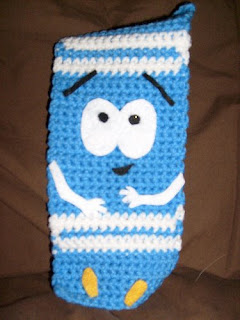 In the top picture are Amigurumi Kyle, Cartman, Kenny and Stan dolls. The pattern for these guys was designed by Nelly who sells it as a pdf file in her Esty shop, La Fee Crochet. Next up is serendipitycrafter's South Park Afghan which she made for one of her sons, (lucky guy!). Finally, it's everyone's favourite/least favourite? tertiary character ever, Towelie. This one was designed by gnathalie2. There's no pattern available, but he's essentially a series of single crochet stitches with features made from felt.
Posted by amber at 1:25 PM

Thanks for posting my afghan...I'm almost finished a second one for my other son. I have some additional information on my blog on how to make charts if you want to include the link.
http://sukigirl74.blogspot.com/
Just hit the south park link on the side bar.
Thanks again

Nice to hear from you. Your sons are so lucky to have these blankets. I've been making very small practice pieces of tunison crochet and I can see how time consuming it is.

Comments on my blog are public, so your link has essentially been posted. I highly recommend that anyone interested in more info on how the South Park blanket was made, use the url suikgirl left in her comment.

@ the first picture with them 4 as trinkets. I'd buy them! that's great stuff! I think you should mail that pic to the creators and start doing business.