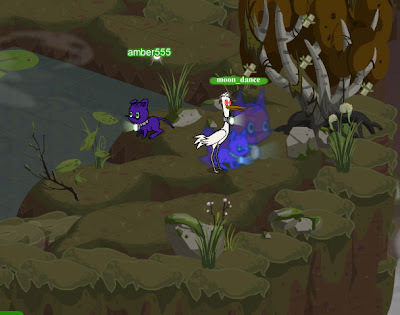 Apologies to my regular readers for the off-topic nature of this post. Tomorrow I'll be back with my 200th post and a new free crochet pattern to share with everyone, so please stop by for that.
If there's anyone else out there who plays Faunasphere, they'll recognize the significance of these pictures.
I was taking these on my computer while my friend moon_dance's fauna leveled up to twenty and received her gold collar. That's currently the final level you can reach in the game and a major milestone that takes many hours of dedication. I wanted to post the pictures somewhere where moon_dance could see them. Since my computer refuses to talk to flickr, for reasons I've never figured out, this is the best place where I can share the pics.
Anyone else out there playing Faunasphere? Someday I need to try making amigurumis that look like my in-game characters. I haven't had a chance to work on that yet. Much like Critter Crunch, I really love the artwork of this game. It's a beautiful world to roam around in.
Moon-dance, you should be able to click on the pictures, then they'll open larger in another window and you can save them to your hardrive. 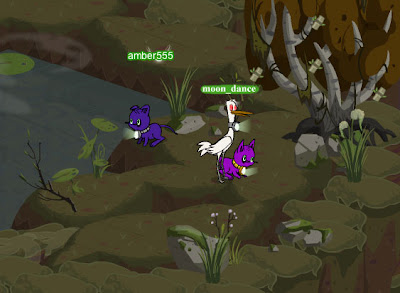 Just as we were doing the final round of zapping for the gold collar (at 2:00 a.m.!) this ridiculous rude flapper showed up and refused to step aside so that moon_dance could make the final zap solo. I've edited out the flapper's name, mostly just so that I could mention how ridiculous and rude it was. 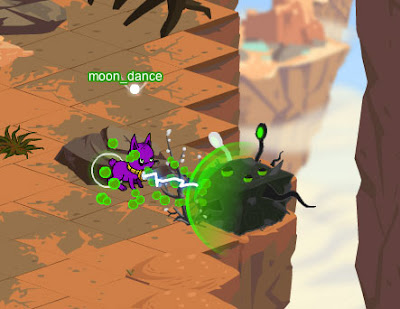 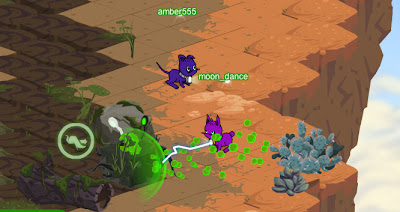 Once you become a level 20, you have a gold collar around your neck and the lazer that zaps out of that collar is randomly changed to a new colour. Moon_dance got the blue zap, which I think looks quite nice. The characters we're playing are called nibblers. Not at all like the nibblers from Futurama. Oddly enough there's another critter in the game called a thumper, that does remind me of the nibblers from Futurama. 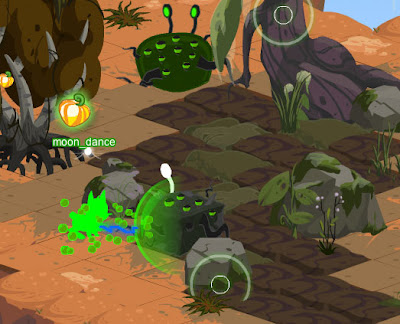 Thanks moon_dance, it was fun. Well worth staying up an hour longer to play photographer. 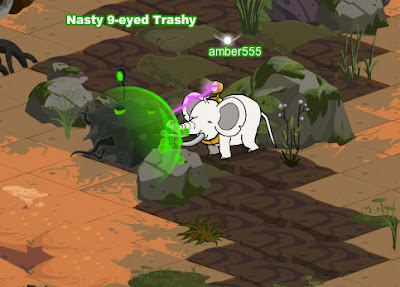 Last, but not least, a shot of my level 20 tusker Ivory, zapping some pollution in her gold collar with her pink/purple laser. And of course, you've all now seen my Faunasphere screen name. If you're a member feel free to send me an in-game friend request. Unless of course you're the kind of player who just asks for eggs and bux all the time. Then you won't find yourself on my friend list for very long.
To the rest of my readers, thanks for indulging the digression. I hope you at least enjoyed the artwork. Don't forget, 200th post and a free pattern tomorrow!
Posted by amber at 12:32 PM

I love Faunasphere too! I was so close to getting a gold collar, but faunasphere ended so its to late :'(

Aww belac, I feel your pain! The game is definitely going to be missed. When I get some time, I'm gong to try to make a crochet pattern for one of my favourite faunas, so that I can have her with me here in the real world. Sorry, you weren't able to get your gold colar before the end. I wish you well and hope that you find another game to enjoy! Thanks for writing!

OMG i loved it too my name was bloobarry12 I just got my lvl 20 REACHER with spots yellow zap! it was awesome but i only played with the lvl 20 for two days then ended! so WEIRD i talked to the faunsphere Team and they said they couldent pay for it it was to expansive coulz people were not paying for there mem Ship! HOW SAD! Thats why they closed! sooo SAD!

also do you guys know amber5555 four 4's not three your a different amber but amber5555 is my twin sis! LOL