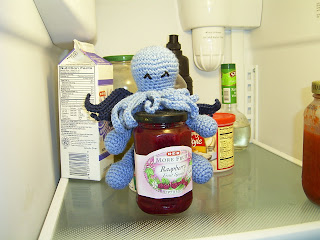 I'm in the middle of about 3 long term projects right now, which is why you haven't seen too many posts around here with an I Made This tag on them. In the meantime, I thought I'd take some time to catch up on displaying some of the things you've made. Thanks once again to everyone who has sent in pictures of projects they've completed using my patterns. The cthulhu family is certainly growing. So much so, that I'm going to split this post over two days so that we don't suffer from cthulhu overload.
Kit was the first person to send me a picture of a completed Cuddly Cthulhu. It appears that this one has penchant for raiding the fridge. His favourite treats; raspberry jam and root beer. 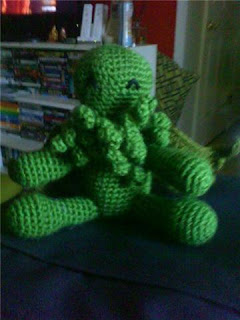 This second Cuddly Cthulhu, in the traditional green, was sent in by Mandi. A special thank you to both of you for these photos. It's great to see this pattern in action and I appreciate all the positive feedback I've received from readers about it.

Now with something a bit less traditional, JulianaK gives us the Creamsicthulhu made using my Tiny Cthulhu Pattern. I'm not normally a fan of orange, but this is a really beautiful yarn. And the cthulhu looks so delicious you could eat him up on a hot summer day! 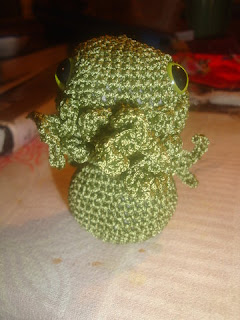 There's something about the eyes on the side of the head that make Fuchsoid's cthulhu seem just a little bit scarier than the other cthulhus. That's scary in a good way though! 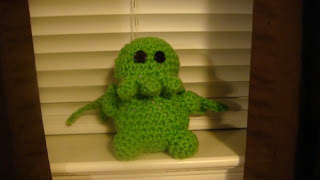 Hmm, I think this cthulhu has been raiding the fridge even more than the one that Kit made. I wonder what he's been snacking on? Tiffany made this cthulhu by blending the wing design from my Tiny Cthulhu with the cthulhu pattern that's available in Christen Haden's Creepy Cute Crochet. She also added some tiny legs to give him his relaxed, lazy stance. 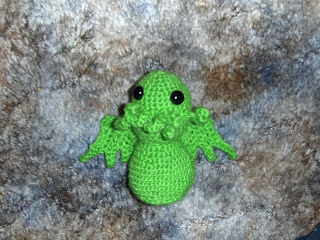 Moving from extra appendages to none at all, David sent me this picture of his bright green cthulhu. I think it's the large eyes that make this one seem way more cute than manacing.
Amazing work everyone! I always love to see the variety of cthulhus that can be created from a single pattern. If anyone else out there wants to share picture of something they've made using one of my patterns post a comment on the blog along with a link to your photo or send me the photo at the email address in the left sidebar.
Tune in the next time I post to see the second installment of Cthulhu Cousins Caught on Film.
Posted by amber at 1:12 PM