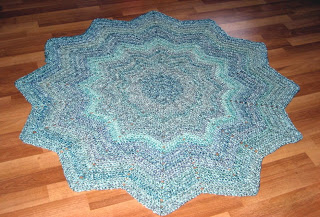 I often spend time in the craft store looking at Lionbrand's beautiful, soft Homespun yarn, but up until now I've been reluctant to buy any. I didn't have an actual plan as to what I could do with it. I just really like the colours and the texture. Finally, with a little birthday money in my pocket, I decided to treat myself and pick up four skeins of Homespun Waterfall. Also, feeling kind of lazy, I decided to just stick with what I know and use it to make another round ripple afghan. What can I say? I love the way these things look and once you get past the first couple of rows it's just mindless repetition that you can use to occupy your hands while watching TV.

Overall, I was really impressed with the Homespun. It's a little hard to see your stitch spaces. I think I would have been frustrated if I was trying this stuff for the first time with an unfamiliar pattern. Doing something familiar, it wasn't too much of a challenge. Aside from that, I was impressed that the yarn didn't rip or fray easily, something I was concerned about because of its soft texture. Looking at the yarn while it was still on the skein I wasn't sure how its variegated colours would look once they were stitched up and I was really happy with the naturally stripey pattern that emerged as I worked with it. I hate changing colours, so to get an effect like this naturally was a lot of fun! 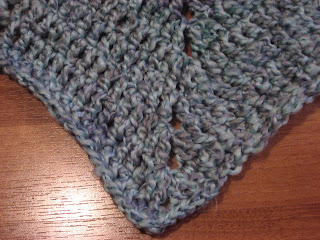 The colours in the first picture are more true to what the afghan looks like in real life. I just wanted to include this picture show the texture.

Next up, an afghan in a different shape. It involves piece-work though, so it may be a while before I get all the little bits finished and sewn together.
Posted by amber at 6:09 PM

Labels: afghan, crochet, I Made This, Round Ripple

The afghan is great! Homespun is fun to work with, once you get used to it. I've been slowly making myself a shawl with the Corinthian color.
I made the mistake of attempting my very first crochet project with Homespun. That ended VERY quickly - I was so frustrated I almost gave up on crocheting all together. Fortunately, I remembered how easy my practice swatches had been with "regular" yarn. :)

Don't expect the finished item to stay looking that nice if you actually use it though. One of my earlier projects when I rediscovered crochet was an afghan with homespun. It's pretty sad looking now - pilled and snagging onto lint that it won't let go of.

Ick. I can see what you mean Skulleigh about the Homespun not being that durable. Most of my afghans aren't old enough yet for me to see how they hold up over time, and I haven't washed them too much so they haven't been worn out from that yet.