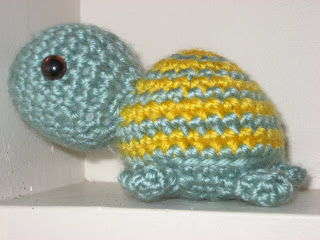 A friend requested the link for this pattern and I spend so much time looking at this little guy online that I figured it was time to actually try making him.

Another step in using up some of the scraps of wool I've accumulated over the last year.

The good news, he's cute and he only took about an hour to make. The bad news, he doesn't stand up by himself. (Look carefully at the photo, the wall is holding him up.) I don't think this is a fault of the pattern. Browsing through the comments people have made about the pattern and looking at the pictures of other turtles people have made using it I have to conclude that the fault lies with me. Everyone else's turtle is standing up! So I'm not exactly sure what went wrong...I'm thinking that either his head was stuffed too much, making him top heavy, or I didn't place the front legs far enough forward to help him balance. Final theory, he's just lazy.

I'm going to try again. After all he's going to need a little female companion. Hopefully the next attempt will go better!

The Tiny Striped Turtle was designed by KristieMN and I found it on Crochetville. You can view the pattern for free, but need to register if you want to post a comment.

Good news everybody! It was a big weekend for Cthulhu Crochet and Cousins. The blog received more than 847 hits over the weekend. Just in case anyone's keeping track (besides me) that's more hits over two days than I've received since the blog was started in January.

It seems that I can attribute the majority of this traffic to getting the Futurama's Nibbler pattern listed on Crochet Pattern Central.

To all those new visitors I say welcome! I hope that you come for Nibbler, but stick around to check out some of the other cuteness. If nothing else, you can use some of these creatures when you crochet your Feast of 1,000 Beasts! Don't tell me you haven't considered it.
Posted by amber at 11:20 AM