Behold, the Catopus! Cute Thing of the Week 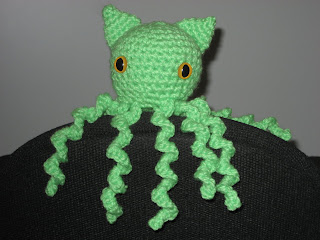 Let's face it, if I could get away with it, I'd put cat ears on everything. I made this using indigo_roses pattern for Leelu the Octopus. It's the first time I've made anything with coils on it, although I've seen them on plenty of different amigurumi toys. The technique is really quite simple and fun. I switched to a hook that was one size larger when I made the chains for each coil because I found it too difficult to fit the hook through the chain the required number of times using the original size.

Indigo_roses has posted a free copy of the pattern she used for Leelu the Octopus on Craftster.

And if you feel your octopus needs a set of cat ears too, here's what I did:

The only other change I made was that instead of making the coils separately and stitching them on, I stitched them in while I was making the body. After the decreasing row of the pattern that reduces the body to 20 stitches, I did the following:

After that extra round, I just continued with the pattern as instructed. I don't think the change makes too much difference to the look of the Octopus. I just dislike sewing pieces together so I took this shortcut to avoid it.

Now I'm thinking of making a whole series of Octopus hybrids. Next up? Maybe a Bunnyopus!
Posted by amber at 1:48 PM

Labels: amigurumi, crochet, Cute Thing of the Week, free pattern, I Made This, octopus