You truly are a child of the 80’s if you can name all four of Pac-Man’s little ghost adversaries pictured here. Inky, Blinky, Pinky, Clyde and Pac-Man (from left to right) first debuted in 1980 and went on to become a cultural icon, eagerly adopted by video game enthusiasts who were eager to play something that wasn’t Space Invaders or Pong. The game's success also led Pac-Man to his own animated series (1982-1984), the song Pac-Man Fever (1982) by Buckner & Garcia, and over 30 licensed spin-off games.

According to the all-knowing Wikipedia, Namco employee Toru Iwatani designed the original game in just over 18 months “and was inspired by the Japanese onomatopoeic phrase paku-paku taberu where paku-paku describes (the sound of) the mouth movement when widely opened and then closed in succession.” 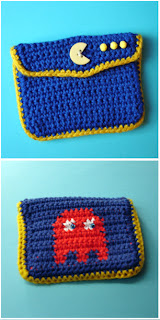 Iwatani referred to Pac-Man’s nemesises as monsters, but throughout North America they were quickly dubbed ghosts most likely due to the way they float around the game mazes. As well, original arcade cabinet versions of the game were titled “Puck Man”, but the name was changed to Pac-Man in North American to prevent clever vandals from defacing the game by changing the letter “P” to an “F.”

If one of your greatest regrets about your childhood is that you never finished Pac-Man, don’t be too disheartened. Turns out there was a coding glitch in level 256 of the original game that caused the right side of the maze to be rendered as random text rather than graphics, making it impossible for anyone to finish.

As of yet there’s no pattern for the Pac-Man and Blinky wallet, but a savvy crocheter could probably figure out how to make their own based on the pictures. It was created by Craftster member PROVOKATZE and you can join the discussion about it here.

Credit for the crochet Pac-Man and ghosts goes to Cerya and the pattern is available as a free download on her blog Full of Fluff.

Finally, if you’re not in the mood for crochet, how about helping the little 3/4 of a circle eat some magic pellets and 2 dimensional fruit while trying to avoid those nasty fast moving monsters. Pac-Man can be played here, and at various other places on the web. Let me know what happens when you get to the 256th level.

Everything I know about Pac-Man I learned from Wikipedia, except for how to lose all three of my lives without ever even getting out of level 1, that's just natural talent.
Posted by amber at 11:48 PM