Glitch Cubimals - Gotta Craft Them All? 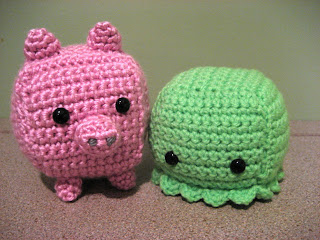 Since last fall I've been playing an online game called Glitch. It's still in beta testing, but every once in a while they open the doors so that more people can give it a try.

One of the things you can do in-game is collect these little wind up toys called Cubimals. Each comes in a mystery box so you never know what you're going to get until you open it up. The toys make cute decorations for your house and your in-game character can race its Cubimals against those of other players. There's also a trophy for obtaining one of each, so much like Pokemon, we're encouraged to collect them all!

I have yet to get my trophy and I'm not going to fill up my real world house by crocheting all of them, but I thought I'd transfer a couple of my favourites to the real world. 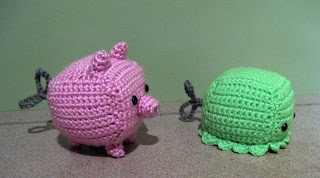 Above you can seem my real world piggy and squid cubimal having a race on the kitchen counter, and below their virtual counterparts are doing the same thing in Glitch. 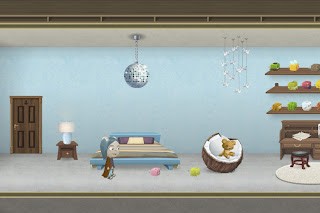 The piggy I made with some pink Bernat Satin, and the squid was crocheted with a sport weight Patons yarn in a lime green shade, hence the slight size difference. For both animals I crocheted in rows, making a flat cube shape and then stitching up the sides to make it three dimensional.

I haven't written up the patterns for these, but if anyone is interested in having a pattern please let me know in the comments section. I'd be happy to post it to the blog as one of my free patterns. With the game in beta still, I wasn't sure how much interest there would be in making these little critters. Let me know!

Labels: amigurumi, crochet, I Made This

I hadn't heard of Glitch before, but it looks really cute! I love quirky games. Would you be willing to send invites to your readers? Apparently it can take weeks to be invited unless a current player invites you.

Hi Kim, I just went and checked my Glitch account and it looks like sending friend invites has been temporarily disabled. The only way in right now is to sign up on their home page. I think once you do that, you'll get an email telling you more specifically how long the wait will be. I believe for me the wait only ended up being about 3-4 days.

Post a comment here or send me an email at the address you see on the top left of the blog, once you get in and I'll be happy to friend you in-game. If you like quirky games, you'll probably enjoy it!

I didn't know that game either, but anyway the characters you made are very lovely
I love the squid =)
makes me thinking of Nemo too =)
the shy little squid which goes to school with him
bravo
I love what you do
hugs from France
xxxx

I love the pig - so I tried to do it on my own (not exactly like in the game). Please take a look :D

A fellow Glitchen! Your cubis are adorable, I would definitely love to make some if you post the pattern!

I started playing Glitch recently when I read your post about it and I'm totally addicted :D I definitely want to start crocheting cubimals too lol

Hello Monica and Kitty, welcome fellow Glitchen! A recent heat wave has been keeping my time in front of the computer brief, so I haven't had a chance to write up the full pattern for the cubimals. I highly recommend checking out: Jana's link above, as it gives a pretty good diagram of how to put together the basic cube body, from there you can be creative and add whatever features you want to make your favourite cubimal.

Have fun stitching and Glitching!

Hello! *replying late* I'm (or was, sadly) Fernstream on Glitch. What's your name there? These cubis are adorable and I'd love to make some myself.

Hi Fernstream, my name was Lynnt on Glitch. It's a shame the game was shut down before more people could discover it. Always nice to hear from a fellow player though. Thanks for writing! Take care!

Just stumbled upon your blog, would love the glitch pattern if you can do one.