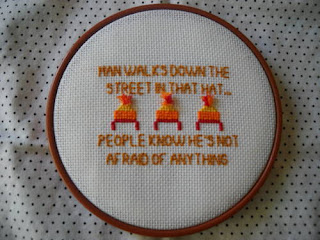 With Can't Stop the Serenity screenings happening world-wide this weekend I can't think of a better excuse to feature another wonderful Firefly inspired stitching. This one comes from Craftster user silentblair. Check out the tiny pompoms on top of those hats, pretty cunning!
And in case you haven't heard, tonight is the Joss Whedon Birthday Firefly Watch Party:

“What can we do to convince Netflix that the ‘verse is worth their while? What can we do to prove that Neilsen ratings arent the be-all and end-all?” Well, how about this- let’s just have the largest on-demand watch party ever! Let’s get the most people ever streaming the same show at the same time from Netflix- 4 episodes of Firefly – and show them its worth a few hundred million to invest in it! Not that they are required to respond, hell, they’re Netflix! But perhaps if we show them that the overwhelming horde of Browncoats worldwide would pay more to see firefly… well, maybe they’ll think twice.
Pencil in June 23rd, 2011, 8pm EST – Midnight EST(5pm-9pm PST) to celebrate Joss Whedon’s birthday by sending the signal further than it’s ever gone before. How many Browncoats can we get on Netflix for four wonderful hours of awesome? -- Courtesy of Firefly Watch.

So if you don't have anything else going on tonight fire up the Netflix, make some popcorn and spend some time in the 'verse!
Posted by amber at 4:44 PM