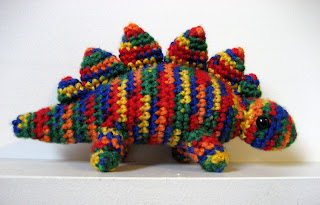 I've got a few things I've made recently that either I've made before or feature patterns I've talked about before, so I figured I'd round them all up into one post, rather than devoting separate posts to each of them.
First up on the left is this terrific little stegosaurus who spends most of his time being attacked and chewed up by a toddler. He was a gift for a friend's daughter for her first birthday. I love all the dinosaur patterns at PlanetJune, but I chose the stegosaurus specifically because he has so many pieces that a small child can grab with their hands (or teeth!). I think it's often hard to find projects that look good in variegated yarn. Usually it looks better wrapped up in the skein, but I really like using it for these dinosaurs. 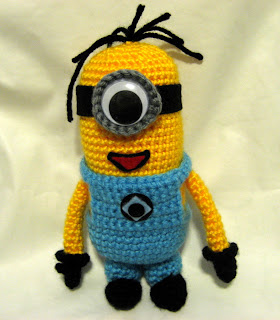 WolfDreamer came up with this fantastic pattern for the minions from Despicable Me. It's very easy to follow and easy to alter to make your favourite of the many minions featured in the film. I created this one-eyed minion as a part of a friend's Christmas gift. Rather than crocheting the eye, I just chose the largest googly eye that I could find in my collection, then crocheted a grey circle around it. My minion was made in Bernat Satin Sunrise, which turned out to be the perfect corn cob yellow for a minion. Every time I look at this I'm struck by how cute the minions are. I really do have to find the time to make a couple of these for myself. I'm thinking of trying the little guy that gets shrunk in the film. After all, he'd be even quicker to stitch up.

And now a quick break from crochet. This is the second bookmark I've stitched from Teresa Wentzler's Knotwork Bookmarks collection. These are really beautiful designs and they don't take too much time to stitch. At least not compared to Wentzler's larger designs. If I have time to stitch, I can usually complete one of these in 2-3 weeks. I also really like that all the patterns use four shades of a contrast colour and then the gold knotwork. Right now I have my eye on a pink bookmark, but I want to replace the pink with the shades of green that are used in one of the other patterns. I'm hoping it will be easy to substitute out one of the contrast colours for another. 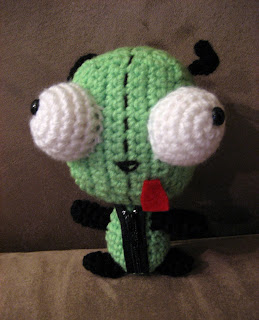 When we first subscribed to Netflix the boyfriend and I watched a lot of episodes of Invader Zim. We both agreed that Zim's dumb, yet faithful, robot companion Gir was the best part of the show. Here is Gir, dressed in the neon green dog suit he made so that he could "blend in" on earth. There are a lot of patterns out there for crocheting Gir, both in his robot and dog form. I eventually settled on this one designed by Craftster user lanikins. My only alteration was that instead of crocheting the zipper, I picked up a small zipper at a sewing store. Then I cut the zipper even smaller so that it would fit on Gir's stomach and used my glue gun to secure it in place. It no longer zips up and down, which is disappointing, but aside from that, I like the effect. I highly recommend lanikins's pattern, which is easy to follow and I think, most accurately captures the slightly square shape of Gir's head.

I don't normally take commissions, but when a friend asked for a few Futurama brain slugs so that she could go to a Halloween party with a group of friends dressed as recent visitors to the brain slug planet I couldn't resist. I used the wonderful brain slug pattern created by Hook & Needles and bought cheap hair bands at a dollar store that can be threaded through the bottom of the brain slug to keep it on one's head. This was a great way to use up some leftover green yarn and I think that making the slugs in various shades adds character. That same friend recently told me that she likes to put her brain slug on when she's feeling under the weather because that cloudy headed feeling you get when you have a cold is probably a lot like falling victim to a brain slug. Now is it safe to have this many brain slugs in one location? I guess it's okay, as long as you have enough garlic shampoo on hand!
Posted by amber at 12:35 PM

Labels: crochet, cross stitch, free pattern, I Made This