Time To Switch to a Garlic Shampoo 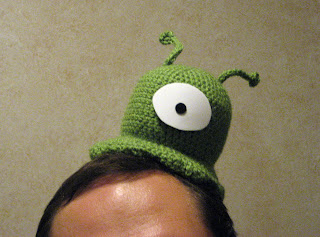 New episodes of Futurama and the appeal of having a really cheap Halloween costume have caused a brain slug epidemic around our house. My boyfriend, who is both wise and witty, appears to be the first victim, but what's really scary is the number of people I have lining up and asking how they can get a brain slug of their own.
If you're the crafty sort you can crochet your own using this terrific free pattern from Hook & Needles. To attach the brain slug to the head I poked a small wire hairband (Dollar store purchase!) through the base of the piece. I thought I'd have to glue it in place so it wouldn't slip around when someone's wearing it, but surprisingly it actually stays put. What can I say. those brain slugs are clingy little devils! The eye was made using a piece of white crafting foam that's adhesive on the back side. Rather than attempting to cut out a very tiny black circle, I just cut open a googley eye and used the black pupil from that. 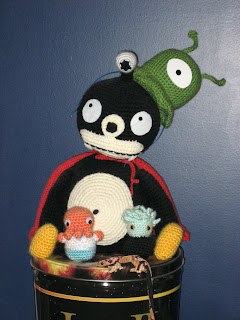 We were joking that it would be fun to carry around a prop bottle of garlic shampoo when one is wearing a brain slug. Simple enough to make, just put a new label on any old bottle of shampoo. Then I did a little Googling and discovered that garlic shampoo is a real thing. It turns out that aside from combatting the tenaciously clingy brain slugs, garlic shampoo also aids in preventing hair loss. Huh, who knew?
Posted by amber at 11:57 AM