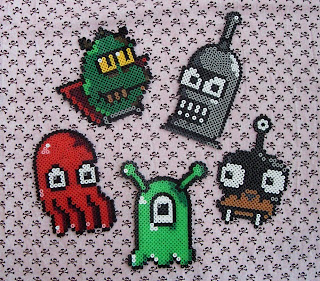 I promise I won't be renaming the blog Futurama Crochet and Cousins anytime soon. It's purely coincidence that we've got two Futurama posts in a row. I think the joy of having new Futurama episodes on TV for the first time in years has been pretty inspiring for a lot of geeky crafters.
First up are these awesome coasters created by Craftster user zombiecakeses. Whether you call them Hama beads, Perler beads or Fuse beads, they work in the same manner. Create a pattern on a peg board with the beads, iron the beads so they melt slightly and stick together, then remove the peg board and you have your wonderful pixelated creation. Search online or look in local craft stores or the crafting aisle of major toy stores for the beads. In stores they usually come in a mixed bag of colours, where as online you can usually order bags of a single colour. You can also check out my Perler Bead Tutorial if you want more information on how to create patterns.
I love these coasters, not only because they are Futurama, but also because they aren't 16-bit video game characters. Don't get me wrong, I love my Mario Bros. and Pac-Man, but for a while it just seemed like that was all anyone was making with fuse beads. It's nice to see someone branching out to make more modern-day pop culture icons. Now I wonder if I have enough gray to make that Bender head... 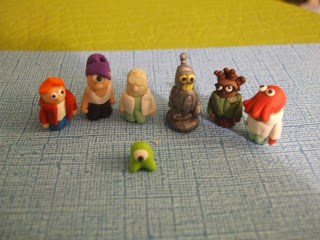 I also wanted to share this work-in-progress because the brilliance of the idea blew me away. Craftster user heatheres76 is converting an old Clue game into a Futurama Clue game. Here you have the little game board pieces which she has sculpted herself. The brain slug is one of the weapons, not one of the playable characters. I can't wait to see what the other weapons turn out to be. I'm casting my vote for Torgo's Executive Powder. What would you suggest?
Posted by amber at 11:28 AM