I've been having fun with my new slicker brush and I thought readers might enjoy seeing the results. Here are three patterns that I've made before, now re-crocheted and brushed out with the slicker brush. All three fluffy amigurumis were made using various shades of Vanna's Choice worsted weight yarn. As you can tell from the pictures I've got a lot of grey yarn to use up.
Above you see the Owl pattern from Ana Paula Rimoli's Amigurumi World: Seriously Cute Crochet crocheted regularly on the left and then crocheted and brushed out on the right. Below is the Bunny Ami pattern from the same book. 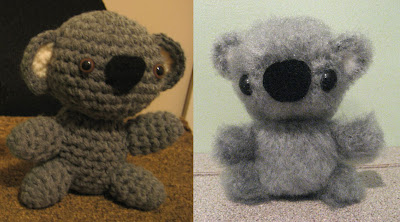 I managed to brush out all of these without ripping any holes in the crochet so my technique is getting better. However, I did learn the hard way that you should always put in the safety eyes after brushing the stitching. I forgot and put in the koala's eyes before brushing and it was quite the challenge to brush around them. You can't see it in the pictures, but his little black eyes have been scratched up pretty badly by the brush.
And what will I be doing with all these fluffy critters? I gave the white owl to my grandma who is a collector of owls and was the recipient of the owl on the left a couple of years ago. She could hardly believe it was the same pattern, as the brushing gave it a totally new look. As for the other two, they may be donated to charity or given away as gifts. I haven't decided yet.
Did you see my first slicker brush project? If not, check out Penny the Penguin.
Posted by amber at 1:27 PM

Labels: amigurumi, Amigurumi World, I Made This, Tiny Yarn Animals

These are Great I have all of these books at home and I think Ill Try brushing a few out after I make them as well. Does the yern have to be wool or can it be just about any worsted weight yarn?

Hi Lilley, I haven't used a real "wool" yet, so far all of mine have been made using Vanna's Choice which is an acrylic yarn. It comes out pretty soft, and very fluffy. I'm sure a real wool would be even softer. If you have some leftover from something it might be worth experimenting with.

I've also been reluctant to try a thinner acrylic like Bernat Satin because I'm worried it may be too fragile and rip too easily when brushed.

When you're making the fluffy critters brush out all the pieces; arms, legs, body, etc. before you sew them to each other. Otherwise it's really hard to make it fluffy around the joining places. Also as I mentioned in the post, put the safety eyes on AFTER you've brushed out the pieces.