March of the Cthulhus! 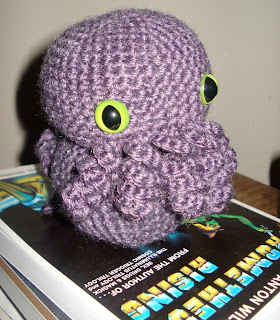 The Cthulhu empire is growing, as my inbox is once again full of messages from people who have been using my Tiny Cthulhu Pattern. Thanks again to everyone whose taken the time to send me a picture of their creations. I'm loving the eyes on this purple cthulhu that was made by Traci. I'm not sure if these glow in the dark, but they sure look like they might. Scary!
I get a lot of messages from people who tell me the Tiny Cthulhu is the first thing they've ever crocheted. It's very flattering to know that I made something that inspired someone to take up a new hobby, and I'm glad the pattern is easy enough for a beginner to tackle. This next cthulhu is Koeniou's first completed crochet project and I think it turned out great! Those big outstretched arms are just waiting to give someone a hug, or worse! 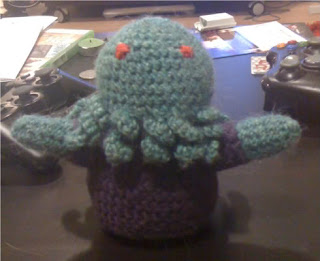 I hope this next one doesn't unravel if you pull on that piece of yarn. A mummy cthulhu, hmm...This was made by Oriane, as a gift for her brother. 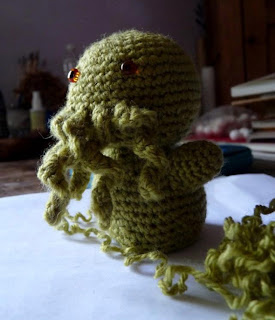 There are some projects where variegated yarn really works and some where it doesn't. Thankfully, Tiny Cthulhus look great in variegated yarn. I like how Ukhsud's pink cthulhu appears to be looking up at the subtitle above its head. Very cute! 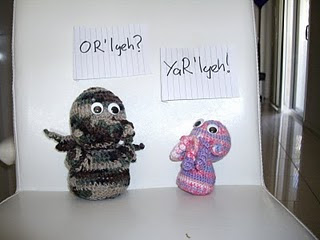 Aww, it looks like this next little guy, created by Adrianna, is angry about something. Don't tell him he's adorable when he's angry. He probably wouldn't like that. Adrianna also has a tip for anyone whose tentacles turn out too coiled up. She says she steamed hers over a tea kettle after she was done and that loosened them up. 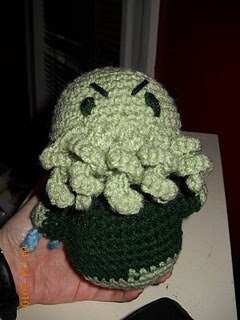 And speaking of tightly coiled tentacles, we have this proud little green cthulhu courtesy of Jessica. 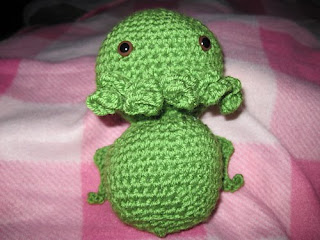 Next, a green cthulhu stitched by Eva. I like the use of the darker shade of green for the tentacles. Eva says she's working on turning the Tiny Cthulhu pattern into a giant Cthulhu and I'm looking forward to seeing the results. 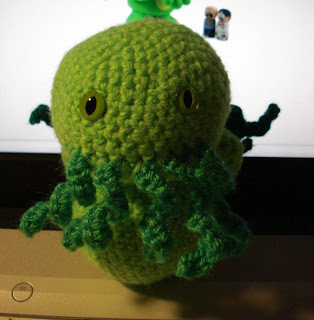 And that concludes this roundup of recent cousins in our Cthulhu family. Thanks to everyone for sharing their creations. If you've made a Tiny Cthulhu or used any of my other free patterns feel free to post a comment and include a link where I can see a picture of your creation.
Posted by amber at 6:31 PM

Thanks for the original pattern. I just finished mine tonight while watching Neverending Story with the wife. You can check him out at my blog, Penguin Postings.

I finished mine yesterday, my first amigurumi piece. I've put a picture of it here. I couldn't get a particularly good picture, and his tentacles came out a bit funny, but I'm still very proud of him!

Thanks for the pattern! I'm now going to try your hattifattener one.

I love these cute little Cthulhus. I will try doing one myself soon.

I LOVE your crochet Cthulu's! I just finished one tonight of my own design, and I thought I'd share - it ended up about 9 inches high.