The Many Faces of Fillion 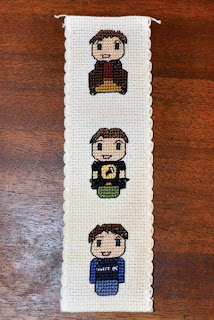 Carrie gets the honour of being the first person to send me a picture of what she's made using my Firefly cross stitch patterns. She used my Captain Mal design and then created her own Dr. Horrible and Rick Castle. What, no Caleb? I can understand leaving him out, even though Fillion was amazing in that role, too.
Rick Castle is wearing his bullet proof vest that says "writer" and Captain Hammer's gloves and belt are made with shiny thread to depict their patten leather look. Great details. I think I may need to make myself a Captain Hammer bookmark someday. This also reminds me that I should be watching more Castle. It's a fun show, but I tend to stumble onto it by accident rather than actually making a point of watching it. I've seen the Halloween ep. where Castle dresses up as Captain Mal about three times though. Maybe that makes up for not seeing some of the other episodes?
Thanks again to Carrie for sharing this. If you're interested in making your own Firefly cross stitch the patterns are available in the left sidebar. I also wanted to thank everyone who has chimed in on my Clover Hooks question thus far. The reviews have been so favourable, I think I'm definitely going to have to pick up one or two.
Also of note, I've created an e-mail address for the blog (look in the left sidebar). I still prefer that people post comments directly on the blog so that everyone can see them, but I figured that in some cases an email address may be more handy. If you don't use a photo sharing service and want to send me a jpeg of something you've made, for example. Or if you have a question and aren't really sure where it should be posted on the blog. Feel free to make use of that email address.
Posted by amber at 12:09 PM