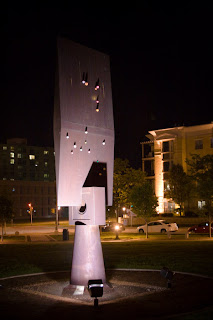 I absolutely love this picture from cathiphop's post on Craftster about Giving a Sculpture a Pox. Cathihop attached magnets to crocheted balls to help them stick to the iron sculpture. Unfortunately, her work has since been taken down, but it did inspire me to go searching to see what else has been happening in the world of crochet graffiti. I was going to do a post on this topic many months ago, but most of the information I was finding was coming from the Netherlands and most of the text about it was in foreign languages. Now it looks like more crochet artists in North America are turning their attention to the world around them too, or maybe I just did a better job of googling this time. Have a look: 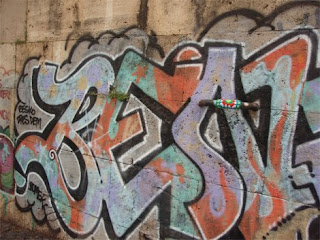 Up first, old meets new. I like how it sort of takes a second glance before you notice the crochet has been added to a painted tag. I wonder how the original artists feels about this enhancement of his or her work? This piece of crochet art comes from Masquerade who likes to leave her mark around Sweden, particularly Stockholm. During a recent world tour she left this piece in Rome. 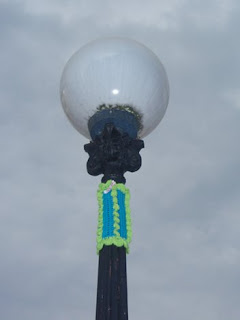 Above: A second piece from Masquerade, this time she's reaching for new heights. 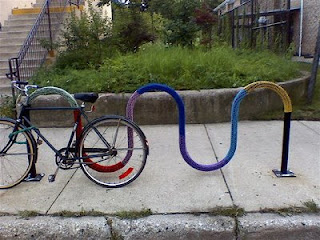 From the Micro-Fiber Militia who help to beautify the city of Chicago through crochet. Not only do they decorate the town, they also ask residents to help them keep track of which pieces remain and which are taken down, and update their blog accordingly. 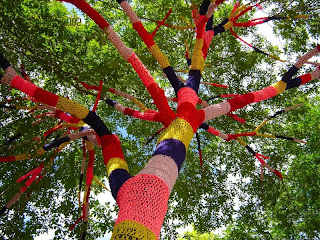 Last though certainly not least, a piece of legally sanctioned public crochet. This Tree Cozy was created by artist Carol Hummel and was a winner in the 2005 Heights Public Art Competition in Cleveland Heights, OH. This link takes you to Hummel's website which begins with a slide show of her work. She does a lot of amazing things with crochet and yarn in general. Someday I may have to devote an entire entry to her work and it's definately on the list of things I'd like to see in person. For now, I urge you to go and take the virtual tour.

So that's a brief glimpse of public crochet art. There are plenty more samples out there which you can find through the links I've mentioned here as well as your own Google searches. These are just a few that grabbed my interest.

When I told the boyfriend, who is both wise and witty, that this was topic for my latest blog entry he immediately volunteered to help place pieces around town if I wanted to start my own Crochet Militia. I'm still on the fence about the idea. If I came across someone's crochet tag while walking downtown it would certainly make me smile and if anyone one wanted to argue I'd definately take the stand that these are art or expressions of free speech rather than vandalism.

At the same time my reservations come from the ideas of art versus use. Right now I usually turn my scrap wool into squares which I donate to a program called Blankets for Canada. From there these squares get turned into blankets that are distributed to the homeless. I like the usefulness of that.

I also can't help thinking of new fallen snow and how it looks so beautiful the first day. Then a couple days later it gets plowed to the side of the road and becomes various shades of black and brown as it's polluted by car exhaust and other chemicals. All the pictures of crochet graffiti I found were taken immediately after the pieces were put up so there's no record of their sustainability. What do they look like a few days, weeks or months later after they've had to endure the elements and pollution? I guess at that point the message changes from one of artistic freedom to environmental concern.

Any thoughts? Feel free to comment.
Posted by amber at 11:43 AM

This is cathiphop, I am part of KnittyGritty MilCity (check us out on myspace), and we did the magnetic balls on the sculpture.
I do understand reservations about sustainability of the pieces; does one really want to lock up their bike on a soggy bike rack? Unfortunately, that's the down side of the temporariness of these pieces, and one of the reasons why we chose not to do many flat pieces. In my opinion, graffiti and street art is dynamic, often beautiful, sometimes thought provoking, and sometimes none of those things. I wanted to use elements that were not permanent or destructive to the structure it sits on to encourage people to look at things they may pay little or no attention to on a daily basis. I have heard the argument, "Why not use the yarn to make things for the needy" and while I agree with it, it confuses me. Street art's function is to be street art, not to keep anyone physically warm. Why not do pieces for the homeless AND the street/pole/statue?
Thanks for including us in your post!

Lovely post! I love Carol Hummel's work, it's amazing! Makes you look at crochet and yarn a bit differently.

This is brilliant stuff; I'm gonna link your site to mine because there's some nifty-grifty things here that I'm totally going to have to gush over frequently.

Hi cathiphop. Thanks for stoppng by. I agree there's no reason why we have to choose to make things for either charity or art. I certainly advocate doing both. Personally, I'm just drawn more to this as a spectator. I like looking at it, but I don't really feel the desire to start crocheting things for my local lamp posts and bike racks.