Alien and Spaceship! Cute Thing of the Week 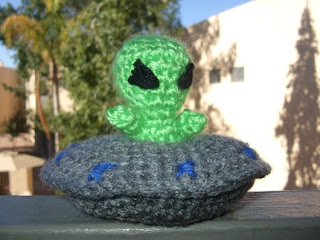 I remember back in the heyday of the X-Files little green men were everywhere and my friends and I were always giving each other little alien trinkets for birthday and Christmas gifts. Maybe with a new X-Files movie coming out this summer these guys will make a comeback. Until then, you can crochet your own alien (complete with spaceship!) curtesy of Etsy seller Emporium. She sells this Pattern for Alien and Spaceship as a pdf file for only $2.00.

And now, one of my favourite quotes, from the season 3 episode Piper Maru, (I can't believe I still remember this!)

Scully: You're in the basement because they're afraid of you, of your relentlessness and because they know that they could drop you in the middle of the desert, and tell you the truth is out there, and you would ask them for a shovel.
Mulder: Is that what you think of me?
Scully: Well, maybe not a shovel. Maybe a backhoe.
Mulder: Well that's good because there's some garbage in San Diego I want you to help me dig through. 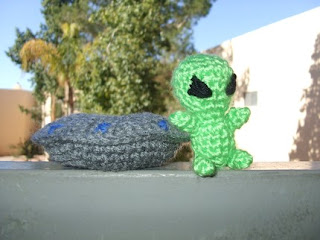 A second picture because I can't resist this shot where it looks like he's walking away from his spaceship ready to terrorize the unsuspecting humans. If only he had a little crochet ray gun...
Posted by amber at 8:00 AM