Catching Up on Cthulhus! 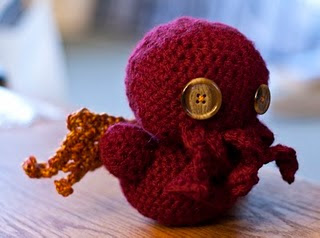 I know things have been a little quiet at Cthulhu Crochet and Cousins lately. I was away on vacation for a while, (more on that in an upcoming post). I've been working on a large crafty project that I won't be able to show in the blog until after the Christmas holidays, and our vacation was followed by several weeks of internet connection problems. Now the large project is finished and the internet connection seems to be connected once more, so hopefully I can get back to more frequent posting.

First off, I thought I'd show a few more of the terrific critters that fellow stitchers have been making with my Tiny Cthulhu and Cuddly Cthulhu patterns. (Check out the left sidebar for the free patterns).

In the top left of this post you see the awesome and fiery maroon cthulhu created by Miss Crafty. I really like the button eyes on this one. I think they really suit the colours of yarn that were chosen.

And speaking of great eye choices, these stitched eyes that Amber J. used on her cthulhu are giving him a look of wide-eyed innocence that I'm sure will easily lure victims into his clutches. 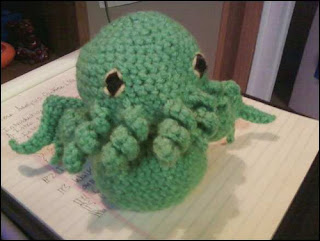 Someday I should do a post that just shows all the pictures readers have sent me of their cthulhus posing with cats because there are a lot of them. What is it about cats and cthulhus that draws them together? You know, I have yet to be sent a picture of one of our cthulhu cousins posing with a dog. Why is that? Perhaps cats just have more of an affinity with evil that draws them to the dreaded cthulhu? This latest instalment of Cats & Cthulhus comes from crocheter Sam B. and looks quite cheerful. 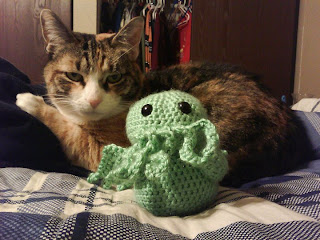 SuziQ put together this Cuddly Cthulhu. Aww, isn't she pretty in pink? I don't know, maybe that bow is making her angry. 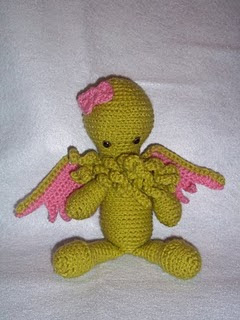 Now here's a more traditional Cuddly Cthulhu courtesy of Elizabeth. In her message she mentions that this was her first time making something beyond blankets and scarves, and I think it turned out great! Elizabeth was inspired to make the Cuddly Cthulhu for a friend who's hard to shop for, but happens to be an H.P. Lovecraft fan. 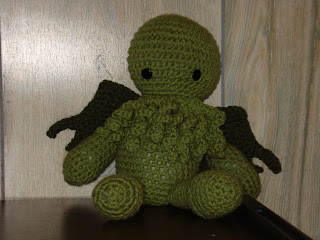 I guess it's only natural that over time the Tiny Cthulhu would evolve legs and learn to walk on the land. This latest link in the evolutionary chain was created and captured on film by Belruel. 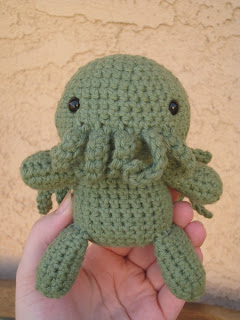 Not to worry though, I still find the legless Tiny Cthulhu absolutely adorable as well, especially this fine little cthulhu crocheted by Sam. (That's a different Sam than the one who made the cthulhu posing with kitty above.) 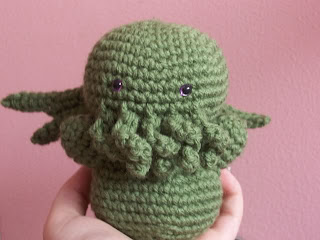 Wait a minute, this isn't a cthulhu! I was incredibly happy to receive an email from Michelle B. who completed this Smiley Bone as a Christmas present for her sister-in-law. While I get lots of pictures of cthulhus (thank you everyone!), I don't often see pictures from people who have crocheted the Bone cousins using my patterns. Thanks Michelle, he looks wonderful! 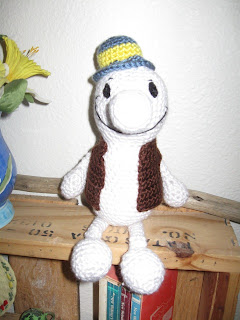 Once again thanks to everyone who sent in pictures of the things they've been making. If you have a picture you want to share you can post a link to it at the bottom of the pattern you used, or send me an email at the address you see in the top left of the blog.

There are plenty more great cthulhus pictures that readers have sent me which I'll try to post over the coming weeks/months. I'm also hoping to get up some pictures of projects that I've been working on lately. That's right, crafting is happening, I just haven't had a chance to blog about it...Stay tuned everyone, and thanks for visiting Cthulhu Crochet and Cousins!
Posted by amber at 11:32 AM